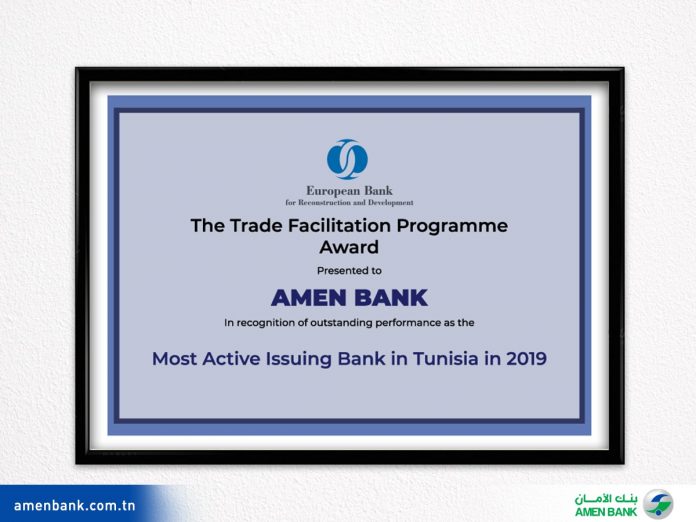 Within the framework of the Trade Facilitation Program (TFP) or Trade Assistance Program (TAP) established by the European Bank for Reconstruction and Development (EBRD), AMEN BANK has been awarded the prize of “The Most Active Issuing Bank in Tunisia in 2019”.

The program currently includes more than 100 issuing banks in 29 countries (including AMEN BANK in Tunisia), with transactions exceeding €1.5 billion since 1999, and more than 800 confirming banks worldwide.

The collaboration between AMEN BANK and the EBRD goes back to 2014 after the signature:

– of a Foreign Trade Guarantee Agreement, for a guarantee line of 15 million dollars,

– a trade finance agreement for a $15 million financing line.

Cooperation between AMEN BANK and the EBRD has developed mainly in the context of foreign trade guarantees.

This distinction confirms the increasing and adequate use of this program, the technical mastery and professionalism of AMEN BANK’s teams and reflects its commitment to serve its clients, particularly for their international trade operations.

The European Bank for Reconstruction and Development (EBRD) is an International Financial Institution dedicated to the development of market economies and the promotion of private and entrepreneurial initiative in 38 countries.

Tunisia became a member of the EBRD on December 29? 2011. Since that date, the EBRD has invested more than €900 million in the country through more than 40 projects.

Since its launch in 1999, the Trade Assistance Program (TAP) has promoted foreign and regional trade in the countries where the EBRD invests.

Under the TAP, the EBRD provides guarantees to international confirming banks, as well as short-term loans to selected banks and factoring companies for on-lending to local exporters, importers and distributors.

Mozambican PM warns against aid cut due to financial crisis