Tunisia: Seif Rezgui and Daesh executioner ”classmates” in the same camp in Libya 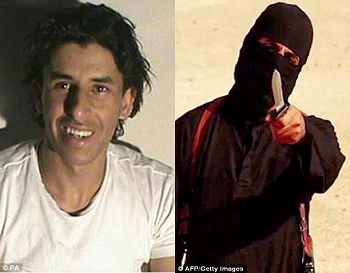 Seifeddine Rezgui, Sousse attacker, who had killed 38 including 30 Britons, was trained in the same terror camp as “Jihadi John.”

Rezgui, 23, who was shot dead after his horrific attack on a hotel in the resort of Sousse last month, was trained in an Islamic state camp (IS / Daesh) in Sabratha near the Tunisian border, reveals the Daily Mail.

Seif Rezgui and Jihadi John, who was identified as a 26 year old Londoner named Mohammed Emwazi, were trained together in this camp in a former military complex.

“It’s chilling to think that these killers were in the same camp at the same time,” a security source told the Sunday People.

The training camp, located on the outskirts of Sabratha, was “specifically set up to target Western tourists on holiday on the Mediterranean coast,” the source said

It was reported last month that Mohammed Emwazi, the terrorist of Daesh known as “Jihadi John” had left Syria to Libya earlier this year.

This “relocation” of the British born extremist who appeared in a number of videos beheading his victims is but a tactical move in the wake of the revelation of his identity as the executioner of the “Islamic State”.

The revelation of the true identity of Jihadi John as Emwazi, a 26 year-old university graduate from Queens Park, west of London, has helped unravel the mystery surrounding his character of bogeyman and precipitated his temporary departure from Syria.

However, Emwazi is now back in Raqqa, “capital” of the self-proclaimed Islamic state in Syria, according to a German expert in the Middle East who claims to be stumbled upon the terrorist in a restaurant.

Jürgen Todenhöfer, 74, a journalist and former member of the Christian Democratic Union party of Angela Merkel, was on a “fact-finding mission” in Raqqa during which Emwazi served as his chauffeur.

Describing him in the Sunday Mirror as “the most unpleasant guy we met there”, he stressed that although Emwazi is constantly hooded as he was driving, the executioner had unveiled his face during dinner. Todenhöfer also revealed that ISIS fighters are living in poverty in Raqqa and Mosul, in complete contrast to their image when recruiting naive Muslims all over the world.

“Everywhere I went, they slept on the ground or in old broken beds. They are paid only if they win a battle – those who have conquered Mosul got between $ 1,000 and $ 2,000 – but normal fighters are paid $ 50 a month.

Namibia / The Embassy of the Federal Republic of Germany informs: