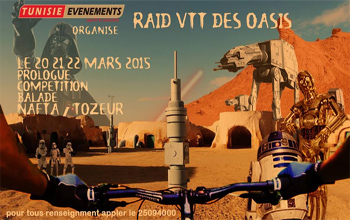 “The Raid VTT Oases,” a major sporting, cultural and tourist event, will be organized in its first edition on March 20, 21 and 22, 2015 in the Tunisian desert of Nafta, Governorate of Tozeur.

It is the site of “Ong Jemel” that will host the mountain bike raid. This site has become a place of pilgrimage for fans of science fiction and special effects, a magical place where mountain biking enthusiasts combine curiosity and adventure.