HomeFeatured NewsConsultation in Saïed’s style : You will be anonymous..., but we will...
Featured News 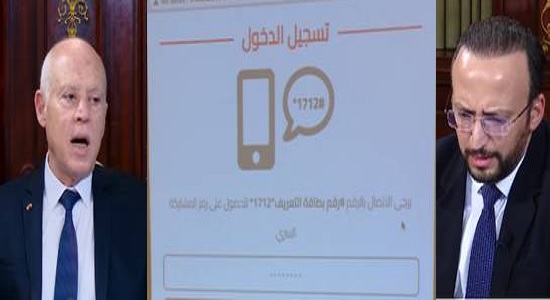 Speaking Wednesday before the Head of State and some of his colleagues to provide details on the platform of the “Istichara” or online public consultation, the Tunisian Minister of ICT said “participation will be done anonymously”.

He said this will encourage people to participate. And then, to take the Tunisians for what they are not, he indicated you need to dial from your smartphone (Your personal phone line is identified, your Sim card is already linked to your ID card and your address), the service number “*1712*CIN♯” which must be preceded by your ID number, that is to say the number of your identity card, the free access door to all your secret life, the number by which the minister’s platform and those who will manipulate it, will be able to have free access to all your confidential information.

It is there that the platform and those who manipulate it will send you the famous identifier of your anonymity.

It is understandable that the organizers of the consultation seek to ensure that participants are not other than Tunisian citizens, and that they want to secure access, for Tunisians only.

Consultation, and therefore not referendum to avoid falling into the trap of a Constitution that would require a passage through a frozen ARP. Therefore, it has no legal value that could make it a tool of government, yet we do not understand the concern to have such a complete database of participants for a simple consultation.

And the same Minister Nizar Néji believes to answer “those who could say that, my identity being in your database, you know me and you know my opinion”, by assuring them that “your anonymity is guaranteed by the secret code that we send you, and we will be able to erase this secret code after three months, to guarantee the TRANSPARENCY and the “ANONYMAT”.

Nizar Néji, was not affirmative about the destruction of the secret codes, but said that WE COULD, which leaves the door open to his ministry, and in the presence of an independent regulator, not to do so.

The minister who used, at the same time and in the same sentence, the two contradictory words of transparency and anonymity, was perhaps committing a slip of the tongue, but strongly revealing the degree of anonymity wanted for this online consultation, on a platform managed by an authority, far from being independent and which has well defined expectations of this consultation and that could make sure its result is not contrary to its expectations.

For the moment, there is silence on the side of Mutuelleville, headquarters of the National Authority for Personal Data Protection. We also recall the various and repetitive security flaws that occurred on the EVAX platform!

The famous “Gross National Happiness” on the menu of the consultation

Nizar Néji also indicated that the platform will include a space for free expression. However, to express oneself freely, could lead to say things against the head of state, his program, his mandate etc.. Doing so, knowing that the identity of the one who thought he was expressing himself freely and anonymously, could make this section a trap, a trap for the participant in this referendum, especially if he is a politician, official, or even a statesman.

The minister also indicated that his platform will include six headings which are the economy and finance, politics and voting, local development, health and quality of life [Editor’s note: The famous Gross National Happiness of which KS spoke to parody the GDP], social, education and culture.

In each section, five questions will be proposed to the consultation, which will thus include 30 questions, with spaces for free expression.

Tunisia: sports and Saharan tourism to get out of the woods