HomeNewsTunisia: Cologne decked out in colors of Tunisia
News

Tunisia: Cologne decked out in colors of Tunisia 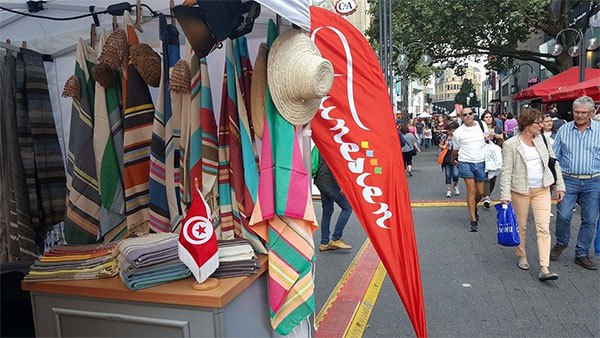 To promote the image of Tunisia internationally, the 4th city in Germany and the largest ”Cologne ” hosted, on September 23 and 24, a 100% Tunisian event ‘International Street Food Festival ” in the famous pedestrian street “Schildergasse,” Cologne’s main commercial avenue known for its fashionable shops and restaurant terraces where attendance reaches 60,000 people per day, the Export Promotion Center (CEPEX) said in a statement.

The festival was jointly organized by CEPEX, Tunisia’s National Tourist Office (TNTO) and the Foreign Investment Promotion Agency (FIPA), with the assistance of Tunisia’s Consulate General in Bonn, in an major event in the city of Cologne in collaboration with two of the most active mixed associations there: the Tunisian-German Association and the Association of twinning between the cities of Tunis and Cologne.

The event was graced by the visit of Mr. Radhouane Ayara, Secretary of State for Immigration, accompanied by the Mayor of the City of Cologne, who came to support by their presence the exhibitors, and in fact impact on this action the official nature.

It should be noted that the timing of this action, dubbed “International Street Food Festival”, organized by the city of Cologne, is not accidental. It coincides, indeed, with the fair “Photokina”, the world’s leading photography and video fair which attracts about 200 K visitors from 160 countries.

The combined efforts of all stakeholders involved directly or indirectly in the difficult and laborious promotion and improvement of the country’s image abroad, proves beneficial for Tunisia we want conquering, not only in Germany our third economic partner, but everywhere in the world where the “Made in Tunisia” has every chance to compete with the most experienced competitors and assert the undeniable attractions of Tunisian skills, reads the CEPEX statement.