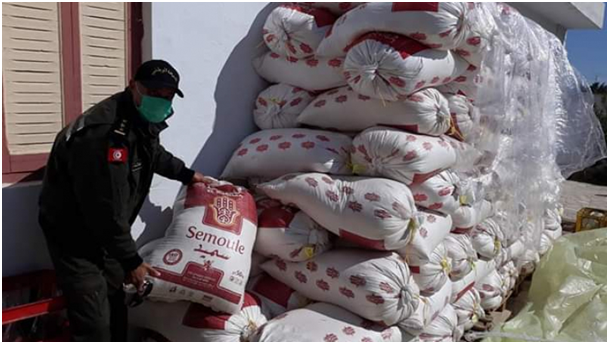 The fight against the spread of the coronavirus in Tunisia has brought with it the fight against one of the most deeply rooted phenomena, and which poisons the commercial practice in the country: It is obviously speculation!

Tunisian economists generally consider that the phenomenon of speculation in Tunisia is a real “destabilizer” of the national economy, already weakened for years, and that it also generates very negative impacts on the purchasing power of Tunisians, which deteriorates from one day to the next.

There is talk of a real shortage of semolina and flour. This is at least what has been observed in small commercial premises and large food stores…

Moreover, the Tunisian Organization for Consumer Information (OTIC) has sent out a cry of distress and called on the government to immediately combat speculation given that several regions in the interior of the country are suffering from a shortage of flour and semolina, particularly in the governorates of Kasserine, Gafsa, Médenine and Tataouine.

OTIC has received several complaints from citizens, especially since these two products are considered essential for these regions, where the number of bakeries is very limited and the inhabitants make their bread at home.

On another front, OTIC has assured that although the regional economic control directorates have intensified inspection and control campaigns, in coordination with the security and National Guard services, they have not been able to deal with this problem.

The organization pointed to the shopping frenzy that has gripped many citizens, and especially the problem of speculation targeting food products, which has spread widely in recent days in the various regions of Tunisia because of this delicate situation, characterized by the spread of the coronavirus.

Minister of Commerce Mohamed Msilini announced last Thursday that his department had carried out nearly 15 thousand control operations since March 1, which resulted in the seizure of 230 tons of food products and 10 thousand liters of milk that are marketed in illegal channels.

Similarly, the Director General of Internal Trade, Karima Hammami had specified, in a statement to TAP that the Ministry of Commerce has increased the monthly quota of durum wheat made available to professionals (including flour mills) by 10% (about 100 thousand quintals additional) and soft wheat by 5% (50 thousand quintals), and this, in order to improve market supply.

For his part, the Director General of Competition and Economic Research at the Ministry of Commerce Yasser Ben Khalifa announced on April 2, 2020, that 1,800 tons of semolina are distributed daily in the markets.

In a statement to Mosaique FM, he assured that “1600 tons in 50 kg bags and 200 tons of semolina packed in 1 kg and 5 kg packages are distributed every day.”

It is recalled that at the opening of the recent National Security Council meeting, the President of the Republic had placed emphasis on the issue of speculation and monopoly of food products, calling on the legislature to mobilize quickly to review laws to punish speculators.

For its part, the National Anti-Corruption Authority (INLUCC) warned against the increase in speculation in Tunisia mainly during this critical period underwent by Tunisia, saying it receives about 300 reports a day from citizens who denounce speculators and publishes a daily releases giving examples of offences.