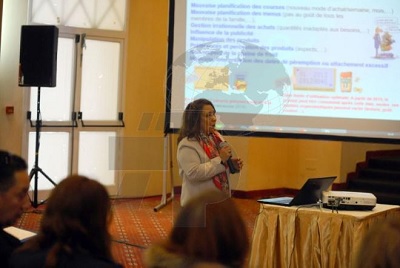 The average food waste of each Tunisian family reaches 17 dinars per month, i.e. 5% of total food expenditure (356 dinars per month), revealed the director of studies and research at the National Consumer Institute (INC), Jalel Rabeh.

Speaking at a regional conference on food waste in Tunisia held recently by the institute, Rabeh added that this rate was obtained thanks to a study carried out for the first time by INC In 2016 and which covered a representative sample of 2000 families in different governorates of Tunisia.

He pointed out in this context that a second study carried out by INC in 2016 on “consumption of bread by Tunisian families”, also covering a sample of 2000 families, showed that about 900 thousand loaves are thrown daily in Tunisia, at a cost estimated at 300 thousand dinars or about 100 million dinars each year.

He added that INC is currently looking into the development of a strategic program to rationalize the consumption of bread.

Director of the Institute, Tarek Ben Jazia, stressed that this meeting is organized in collaboration with the UN Food and Agriculture Organization (FAO) and includes the governorates of Greater Tunis, Zaghouan and Bizerte.

It aims at identifying the causes of food waste and proposing solutions to deal with this phenomenon, with the participation of several structures such as the offices of academic affairs and school affairs in addition to training and awareness-raising of supermarket staff.

These include raising awareness among families of the need to rationalize food consumption and preparing lists of people attending university and school restaurants by setting up a system of reservations to determine the quantities required.

There is also need to conduct opinion polls in a continuous manner, in order to know the needs of pupils and students, he said, indicating that food waste does not only involve families but also includes university and school restaurants, supermarkets, hospitals ….

He added that food waste has a negative impact on the country’s economy and the state’s financial equilibrium, noting that the state mobilizes about 400 million Tunisian dinars (MTD) annually to subsidize flour.

This waste also has effects on the environment, especially since 68% of household waste is organic (food scraps), of which only 5% is recycled.

Director of Studies, Surveys and Trials at INC, Darine Dokki, for her part, stressed that a number of European countries, including France and Italy, have put in place legislation to reduce wastage of food products, while other countries, the USA, England and China, signed waste reduction charters and engaged civil society to raise awareness about the gravity of this phenomenon.

According to a study published by the UN Food and Agriculture Organization (FAO), the annual rate of food waste per individual is around 16% in the North Africa and Central Asia, 34% in Europe, 31% in Asia, 39% in North America and 11% in Latin America.