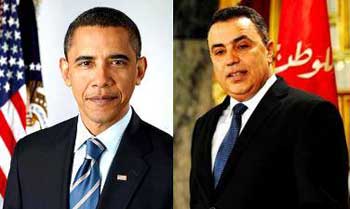 Carney says the two leaders will discuss how the United States can support Tunisia’s democracy, which has developed since the overthrow of its dictator three years ago as part of the “Arab Spring.”

The leaders will discuss a broad range of bilateral and regional issues of mutual interest, including U.S. economic, political, and security assistance to support the Prime Minister’s reform agenda and Tunisia’s stability.

Prime Minister Jomaa’s visit is a demonstration of the strong bonds of friendship between the American and Tunisian people, and America’s enduring commitment to Tunisia’s democratic transition.

Since the uprising, Tunisia has been wracked by terrorist attacks, social unrest and a limping economy. Carney says the two leaders will discuss possible economic, political and security assistance from the U.S. to support Jomaa’s reform agenda and Tunisia’s stability.

Tunisia: A 6 months plan to support enterprises affected by the...