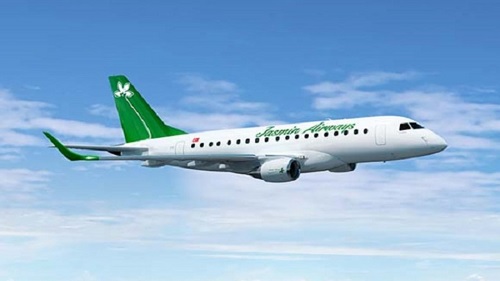 Jasmin Airways announced in a press release that it has acquired two Brazilian-built Embraer 170 aircraft, each with a capacity of 76 seats. It will operate short- and medium-haul charter flights to Europe and the Maghreb.

It will also offer crewed aircraft rental services for other markets over specific periods.

The company, which has created some 100 direct jobs, has chosen Enfidha-Hammamet airport as the operational base for its activities, since it is located between the two tourist centers (Hammamet and Sousse).

Djerba airport will be the company’s second operational base. However, it will operate at all Tunisian international airports and encourage its partners to also schedule destinations such as Tabarka and Tozeur.

Jasmin Airways plans to consolidate its fleet with new aircraft each year. The number of its employees will increase as the growth envisaged in a market where the demand for charter flights is very high, particularly during peak periods in the high season.

Ali Ben Amara, Chairman and CEO of Jasmin Airways, said “obtaining our AOC is for us the culmination of a long career in the aviation industry, where we have been working since 1998, through our training schools that have seen many generations of professionals from the aviation industry emerge from the ranks of the world’s leading airlines.”

Tunisia: “I’m not Robin Hood”, but the rich must contribute more