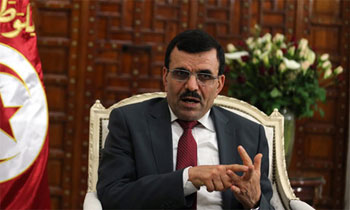 There will be no “Islamisation” of post-revolutionary Tunisia and the Islamist-led government has no hidden agendas or intention to monopolise power, the country’s new prime minister has told the Guardian.

Ali Laarayedh, a torture victim of the former dictatorship who spent 13 years in solitary confinement, was speaking in the wake of the social upheaval in Tunisia that followed the assassination of leftist leader Chokri Belaid in February.

That led to the resignation of the former prime minister and the replacement of three key ministers from the Islamist Ennahda party with technocrats. Ennahda, which has governed in coalition with two small secular parties since winning the 2011 elections, has been blamed by the opposition for Belaid’s murder.

That killing was an “attack on the revolution and the country”, Laarayedh said. “This is a very sensitive transition period – these are compromises we’ve made to calm the situation which is very tense. We want to govern through consensus.”

Tunisia has been regarded as a model for the region of democratisation and more progressive Islamism since the overthrow of the dictatorship of Ben Ali two years ago triggered uprisings across the Arab world. But polarisation between Ennahda and the secularist opposition, including elements of the former regime, has grown as the finalisation of a new constitution has been delayed and political and social tensions have deepened.

According to Laarayedh, the split in the country is between “the forces of the revolution and those who oppose it and are afraid of democracy” because of the threat to their interests and loss of power, rather than a conflict about ideology.

The Ennahda-led government has been under attack for failing to protect the security of opposition groups, including from Islamist activists, and delays in reforming a corrupt and heavy-handed police force. Opponents of the ruling coalition have also accused Ennahda of wanting to insert sharia law into the new constitution, though that has been ruled out.

Four extreme Salafists have been arrested for Belaid’s murder, but the ringleader of the group is believed to have escaped to Algeria. “The investigation is not yet concluded so we still don’t have a final result as to who was behind it and their real aims,” Laarayedh said. Interior minister at the time of the murder, Laarayedh has promised to respond to pressure to crack down on violent jihadists.

But speaking in a former palace of Tunisia’s one-time Ottoman rulers, he added that Salafism included non-violent as well as violent trends. “We have no partnership with them and have a different view of society, religion, citizenship, women’s rights and elections. The state guarantees the freedom of all to exercise their beliefs peacefully, but if they force their views on others, it will act against them within the law.”

The issue has been inflamed since the French military intervention in Mali, which the Ennahda-led government criticised. Senior official sources confirmed that the Tunisian government refused French requests to open its airspace for the intervention, unlike Algeria.

“Wars are easy to start, but bringing them to an end is much more difficult,” Laarayedh said. “We don’t support intervention in other people’s affairs and we don’t accept others to intervene in ours. Revolutions, wherever they happen, strengthen national independence and sovereignty.”

The prime minister rejected opposition criticism that the government has failed to confront the crisis of unemployment and poverty which triggered the 2010-11 uprising or break with the dictatorship’s IMF-favoured economic policies. The Ennahda-led government backed a social economic model “closest to the Scandinavian countries”, Laarayedh said, arguing that in the US and Britain there had been “freedom and growth but problems with social equality”, while socialist economies had “growth and social justice, but problems with freedom”.

He also insisted that “no conditions have been imposed” on Tunisia in negotiations with the IMF for a standby loan facility, which is close to agreement. He said his government was trying to diversify economic relationships from its reliance on France and the crisis-blighted EU to other parts of the world, including China, Turkey, Latin America and Japan.

Laaraeydh’s transformation from political prisoner to government minister was dramatic. “My appointment at the head of the interior ministry proved that a real revolution had taken place, as I was one of its victims. But in my job as interior minister I disregarded what happened to me personally.”

He was sentenced to death, tortured and spent a total of 14 years in prison, 13 of them in solitary confinement, for his political activism with the Ennahda movement, which was violently repressed under the Ben Ali dictatorship. Laaraeydh’s wife, Wided Lagha, was sexually abused by interior ministry officials.

The key to surviving years of solitary confinement, he said, had been “to stand back and analyse every small thing that happens to you – rather than just accept the situation and allow your mental capacities to be degraded. Without perseverance you risk losing your mind.”