HomeNewsCounselor of U.S. Department of State: "We support Tunisia in preserving democratic...
News 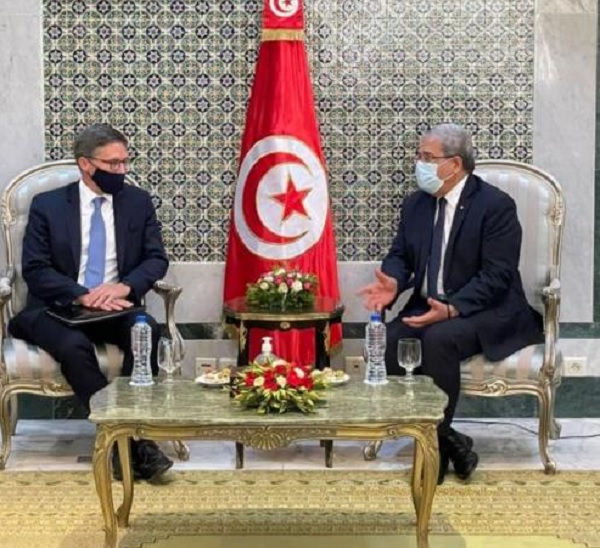 Counselor of U.S. Department of State Derek H. Chollet reaffirmed his country’s “support to Tunisia, to continue preserving the democratic gains, the foundations of the rule of law and the values of modernity that bind the two countries.”

At his meeting Tuesday with Minister of Foreign Affairs, Migration and Tunisians Abroad, Othman Jerandi, the U.S. official emphasised “the US willingness to work with Tunisia to address many challenges, and continue the dialogue on several issues of common interest, said a statement from the Tunisian Ministry of Foreign Affairs.

For his part, Jerandi assured the U.S. official that “the exceptional measures announced by President Kais Saied last July 25 are based on Article 80 of the Constitution. They are aimed at protecting the state and its institutions and at the same time deal with the political, economic, social and health crises,” according to the ministry.

Quoted in the same statement, Jerandi stressed “the commitment to the republican and democratic regime, respect for human rights, freedoms, and the rule of law, reiterating the firm commitment of the President of the Republic to fight corruption, as announced during his statements and meetings with various US and foreign delegations.”

During his meeting with the Counselor of U.S. Department of State, the Minister of Foreign Affairs welcomed the “excellent level reached by the relations of friendship and bilateral cooperation, saying Tunisia is looking forward to further developing this cooperation and giving fresh impetus to the strategic partnership between the two countries.

In addition, Jerandi renewed Tunisia’s thanks to the United States for the major support provided to the country in the fight against the coronavirus pandemic.