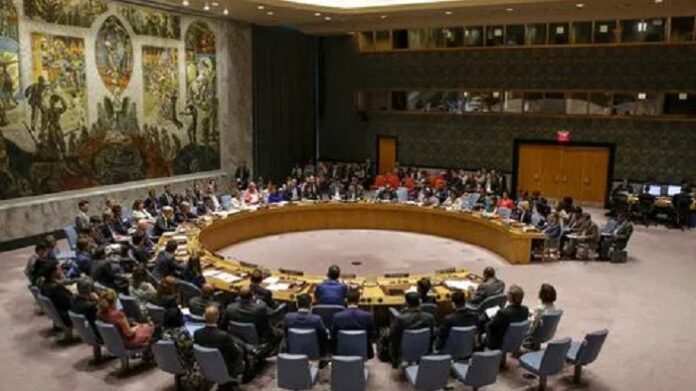 Wednesday, unanimously adopted the Tunisian-French resolution calling for a global ceasefire linked to all ongoing conflicts in order to facilitate the fight against the COVID-19 pandemic.

The unprecedented scale of the new coronavirus pandemic “has the potential to endanger the maintenance of international peace and security,” the international body said, adding that it could also hinder progress in peace-building and development in countries emerging from conflict.

The resolution, therefore drafted by Tunisia and France, calls for “an immediate cessation of hostilities in all situations” on the Security Council’s agenda.

It is the first Security Council declaration on the pandemic and its first real action since the beginning of the scourge.

Tunisia’s representative to the UN, Kais Kabtani, hailed it as a “historic achievement” but experts, quoted by international media, questioned whether the text would have any impact and said the paralysis has undermined the Council’s credibility.

UN Secretary-General Antonio Guterres had raised the idea of a global ceasefire last March to help unite efforts against the outbreak of the virus in the most vulnerable countries.

But it took more than three months for the Council to adopt the resolution, partly because of disagreements between the United States and China.

In the resolution, the Security Council called on “all belligerent parties involved in armed conflict to engage immediately in a sustained humanitarian pause of at least 90 consecutive days,” as many countries struggle to contain the new coronavirus.

The proposed ceasefire “will allow the safe, unhindered and sustained delivery of humanitarian assistance,” the Council said, noting that the fight against terrorist insurgent groups is excluded from the resolution.

No reference to WHO

The new text makes no reference to the WHO, which the United States has criticized for its handling of the crisis. Washington objected to any mention of the WHO last May.

The paralysis of the organization for more than three months has been widely criticized, including by some members who shouted their “shame” at its inaction.

During the negotiations, the United States and China, the two largest financial contributors to the UN, had both threatened to veto the resolutions.

According to diplomats, Indonesia, a non-permanent member of the Security Council, helped negotiate a compromise that saw the addition of a reference in the preamble to a General Assembly commitment to support the World Health Organization.

This vague reference was considered satisfactory by China, which wished to stress the importance of the WHO, and by the United States, which detached itself from the United Nations body in its management of the pandemic.

UN skeptical about the effectiveness of the ceasefire

On Thursday, António Guterres welcomed the fact that his call for a ceasefire was supported by nearly 180 countries and more than 20 armed groups, but acknowledged that it had not been followed by concrete action.

“It seems unlikely that the call for a ceasefire is likely to have much impact in many war zones,” said Richard Gowan of the International Crisis Group think tank.

“The Council missed the opportunity to revive the Secretary-General’s comprehensive ceasefire in April or May, when a resolution could have made a significant difference.

“This looks like a belated face-saving measure after months of difficult diplomacy,” he added.

Tunisia, through its Foreign Minister, Noureddine Erray, said “the adoption of this resolution is symbolic in so far as it extends the concept of peace and security to other aspects, including health, which was not among the issues within the competence of this council”.

In a statement to the TAP, he indicated that the adoption of this draft “will provide all countries of the world with support in the fight against unconventional crises.”

The Tunisian diplomacy has “succeeded in conducting negotiations and overcoming the differences and conflicts between a number of member states on the form and content, before it managed to bring together all members around the draft, he stressed.