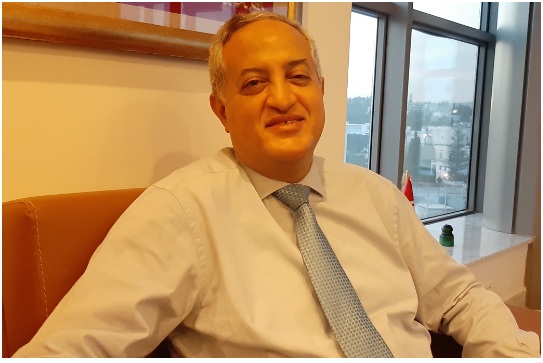 He is almost the only minister to be able to affirm what could be called the continuity of the State.

A graduate of “Polytechnique France”, he had worked with major groups such as Capgemini, Vivendi and SFR.

He is one of the rare who are just the right men for the right place. That would explain, perhaps, why he was able to resist at least two governments.

A real quiet force, smiling, as when in this interview with Africanmanager, he “accuses” the Tunisian banking system and the public purchasing system of putting obstacles in the way of digitalization.

But he also talked about ICTs after COVID19 and 5G.

The 1st wave seems to have been the golden age of digitalization. That upturn stopped abruptly with the end of the lockdown. What happened exactly?

During the COVID-19 period, the common goal was to defeat the coronavirus. We also worked, public and private on the same side, and we worked without constraints, nor process to follow, as for the purchases.

All of them were also working for the country, the sector’s professionals, SME-SMI, Start-Up, and in two or three exchanges, they gave the solution to the problem exposed.

Some projects were developed after two or three sleepless nights in a row, as for the traffic authorization platform, the 1818, the 1017 with the Post Office, or the e-Wallet, technically done in only 2 weeks.

It must also be said that we were working without a net, taking the risk of delivering one or two applications whose tests had not been completed.

This state of mind is not always available. And the constraints, we came back to it. As I said before, the speed of the public procurement process does not allow us to carry out digitization and digitizing with the speed we need. We are lagging far behind in this process, even compared to neighboring countries and African countries. And today with the current system of public procurement, it is impossible to move forward and achieve the goal of digitization. Today, in fact, it takes between 12 and 18 months at least, to sign a contract, in a situation where technology is evolving almost at the speed of light, which would already make any chosen solution obsolete.

What are you doing to remedy this deceleration?

To remedy it, we decided to capitalize on what had been done during the 1st wave of COVID-19.

We will probably end up developing a public procurement process, especially for ICT and digitalization.

And for that, we have given proposals that would make us save more than 4 months in this administrative process of public purchases, such as removing the ceiling on the amounts, more flexibility for Open-Innovation, and especially a better and greater participation of young people.

All this, without forgetting the inevitable PPP, which is the only way to ensure that 1+1 gives 3 and not 2.

With the help of the private sector, whom I would like to greet in passing, and Kais Sellami in particular, we launched a portal to collect project ideas, particularly in the health sector.

We have received 200 of them. After filtering, about 40 were selected, 10 of which were implemented.

For the rest, it is the absorption and implementation capacity of the Ministry of Health that is still lacking, but could be revived at any time.

So last July, 3 Start-Up companies came to us for a solution on Mobile to make appointments for public hospitals. But no hospital expressed the need for it.

Otherwise, we are currently working on a new concept, which we call “Tech4Tunisia” that could provide solutions, like the “Tech4Health” launched at COVID-19, for other sectors.

It will require its own legislative framework, to allow start-ups and innovative SMIs to work serenely and easily with the Administration, to access more easily to the Administration’s projects and to help it in the digitization process.

This framework could initially apply the obligation to grant, made in 2013 under the SBA (Small Business Act), 20% of budgets to SMEs.

Then, to integrate failure into the project risk, and to allow Framework on the same project to find solutions to the Administration’s problems in terms of digitization.

What is the status of the projects that were launched at COVID, such as the e-Wallet?

This application had been made in a very particular context, that of the distribution of financial aid to needy families.

For this, there was the Post Office and the banks via the SMT and the 3 telephone operators.

The 1st one was ready and started using the D17 application, in dematerialization of the postal order, which became an In & Out payment method.

For the rest, the BCT had to give its approval for the creation of one or more payment institutions.

In 2020, it granted two of them to private individuals, but they have not yet been seen in operation.

On the telephone operators’ side, we were able to convince the three operators to join forces to create a single payment institution.

In fact, they will very soon make a joint request to the BCT for a common payment institution.

And I can assure you that this will be the solution for Mobile Payment in Tunisia.

The project, I told them, will not be done to make money, but for financial inclusion in the country, thus creating interoperability between them.

But I would like to say, and I take responsibility for this, that it is the banks that have blocked and delayed Mobile Payment in Tunisia for 13 years, because they consider that telephone operators are no more than competitors, while the targets and uses are different.

The problems are now beginning to be resolved, but at forceps, due in particular to a circular from the BCT.

TT, for example, had been asking for this since 2009 and had even then acquired the technological platform it needed, but the BCT refused, asking it to do so with a local bank.

What happened to Decashing, which had gained momentum during the first wave of COVID-19?

Such a project, for the creation of a strong payment institution, is an integral part of Decashing.

Bank cards exist. There are some 3.5 million of them. But the vast majority of them are used for cash withdrawals.

That’s why I say that the Tunisian banking system is a real cash economy.

And it’s the banks that have killed electronic payment, by taxing it.

For this, I give you an example that is both striking and absurd compared to the strategy of decashing, the taxes imposed even on direct debit to deter the customer.

What is the major project you are working on in the short term, knowing that the longevity of a minister is now very short?

We work as if we were going to stay indefinitely. Therefore, we’re working on the project for electronic document sharing between Administrations.

The decree-law had been signed. The implementing decree should be signed in a few days. And it will revolutionize the Administration, if of course it is applied and when the different systems of the different parties interconnect and interface.

But there’s a lot of paperwork to be exchanged, without the need for a system, like what we ourselves give to the ministry [Editor’s note: Kaspersky blacklists the site of the Ministry of ICT as a dangerous source of the Internet], or anything that is “by default”, or by electronic mail management that is generalized across all ministries.

To this end, and in cooperation with the civil service and the help of foreign experts, a working group will be set up to communicate and drive change, and to ensure the support of all administrations.

We also promised, and have begun to do so, to facilitate administrative procedures for the citizen.

Today, for example, the Ministries of Social Affairs and Education no longer require the civil status document, after we gave them the opportunity to access it themselves.

Soon we will add the documents required for the CIN (National Identity Card) and passports.

On the other hand, the project of the electronic birth certificate by QR Code, promised by Youssef Chahed, has been abandoned due to legal problems.

Is there going to be a license offer for 5G, and when?

What I can already guarantee is that we won’t stay on the sidelines of new technologies.

But we will have to choose the right timing for the launch of 5G.

So right now, we’re looking at what’s happening elsewhere in the world, and studying the needs of 5G, which is more professional for businesses than for the general public in terms of ease of use.

INT has already carried out a study on the subject of 5G, and is currently working on the possible economic model for 5G, the type of call for tenders to be launched, classic and based on the best offer or not, the frequency plan to be put in place, and the impact of 5G on the health of citizens.

And it is this study that will determine the best timing for the call for tenders, taking into account the maturity of this technology and the ability of operators to introduce this new technology.

Our idea is that the specifications will be ready in 2021, once we are certain about the type of call for tenders and the awarding of licenses.

In the meantime, operators have asked us for the possibility of setting up pilots in one region.

We intend to respond positively, and we will ask them to open up their various networks free of charge to companies that would like to try it out for services that require 5G.

To sum up, then, and barring other developments, 2021 will mark the installation of pilots and the launch of the call for tenders, for licensing and launch in 2022.

Hand-Sets for 5G will also have to become accessible, whereas the penetration rate of this type of Hand-Set does not currently exceed 3 or 4% in Tunisia.

Does the State still have shares in the capital of Ooredoo, the shares that had been subject to confiscation?

According to the information at my disposal, the Tunisian State had 9% in the capital of this operator, all pledged against bank debts.

And I think that the local banks have exercised their right of ownership, the State has not repaid the loans of the former owners.

Tunisia: fish production posts 3% increase in first half of 2012