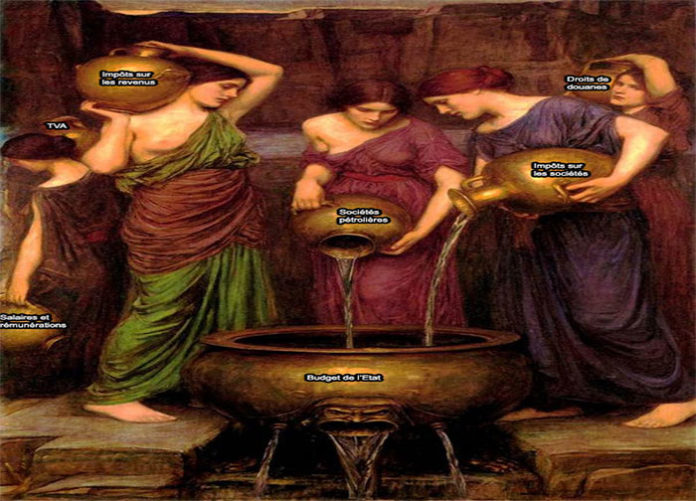 In Greek mythology, the Danaïdes are condemned to spend eternity carrying water in a sieve or perforated device. In the Tunisian reality, Tunisian taxpayers seem to be condemned to the earthly hell of taxes, without the state budget being able to make all this money, other than to cover expenses, without managing to inject enough new money and invest to create more wealth, more income for the state and relieve the tax pressure on individuals and operators.

Where does the state’s money come from, and how much?

In 2019, the State was able to collect TND 32.366 billion in own resources, and TND 42.254 billion from all sources, including debts and donations.

This, “thanks” to an unprecedented tax pressure of 25.3%, which means an increase by more than two basis points in a single year; tax revenues have fed own resources by more than TND 29 billion. The State even exceeded its own forecasts for the same fiscal year 2019, by capturing TND 1 billion more in tax revenues.

It must be noted that the Tax Department has dug deep into the pockets of taxpayers, almost to the point of piercing them!

All of these are included in the indirect tax envelope (up 7.7% compared to 2018, and up 5.3% compared to forecasts), and which increase the overall costs of the Tunisian and his purchasing power.

VAT, CD and CC have a direct or indirect impact on the purchasing power of Tunisian citizens, who find themselves practically bled dry by the tax authorities.

Where does the state’s money go?

The State’s own resources, coming from the resources of its citizens, both public and private, cannot be eternal and would not be renewed without investment. It is the latter that creates wealth and allows the State to levy the taxes that provide it with its own resources.

However, out of its total resources for the fiscal year 2019, Tunisia has earmarked only TND 6.140 billion to investment, or barely 19%, and only 17% of its expenditure.

This may make us say that the Tunisian state budget is a real barrel of the Danaïdes. Most of what is poured into it goes almost on the ground, and in any case, where the money is not recycled to create new wealth that would create new jobs.

It could be argued that wages feed consumption and consumption feeds job creation. This is certainly true according to more than one economist. The same economists, however, draw attention to the fact that consumption does not create enough jobs, especially in an economy based on imports and processing.