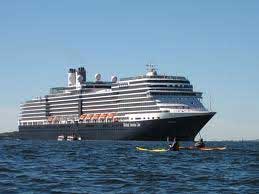 American tourism cruises Company “Holland American Line,” has re-integrated Tunisia in its stopovers in the Mediterranean, the Ministry of Tourism said Wednesday.

Last Saturday, cruise ship “Rotterdam” had arrived in La Goulette with more than 1,350 on board including 650 American cruise passengers who visited Carthage, Sidi Bou Said, the Medina of Tunis and the Bardo Museum.

After a long absence, the ministry announced that “the American company has scheduled fifteen stopovers in Tunisia in 2013.”

It recalled that “U.S. companies have suspended stopovers in Tunisia since September 2012 and the return of U.S. cruise was preceded by consultations between several Tunisian operators and American cruise companies, especially during the recent Tunisian participation in the “Med Sea Trade” show held in Marseille in December 2012.”

According to the Department of Tourism “this return has been welcomed by Tunisian professionals of this sector which has declined sharply over the last two years. Nine hundred cruise passengers of different nationalities had visited Tunisia In 2010. ”

Tunisia: foreign and joint investment intentions up 27% in 1st nine...