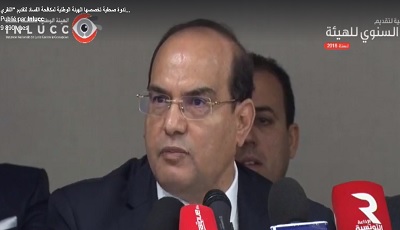 President of the National Anti-Corruption Authority (INLUCC), Chawki Tabib, said at a press briefing on Thursday, November 23, 2017 in Tunis that corruption persists in Tunisia with the same strategies, same tactics and methods as those practiced under the Ben Ali regime.

Worse, the same people involved in the Ben Ali era are at work today. “These are the same practices that are repeated and with the same people as if nothing had changed since the Revolution,” Tabib pointed out.

He added that corruption has affected most public companies and institutions and has spared almost no company, citing the cases of STEG, SONEDE, CNSS, National Television, National Radio, Bourguiba School, Tunisair as well as funds and faculties.

Cases of suspicion relating to recruitment and public procurement in several administrations and public structures were also mentioned, such as the Tunisian Drilling Company, the National Company of Cellulose and Paper and the loan and support fund for local authorities under of the Ministry of the Interior.

1671 cases (48.7%) are under examination, 1048 (30.5%) in the follow-up phase, 94 others were sent to the courts, another 108 were sent to specialized administrative structures and 47 to the Truth and Dignity Commission. Add to this the 5,308 records inherited from the National Commission of Inquiry into Corruption Cases.

The complaints lodged with the INLUCC were made against legal persons (1,293 files), followed by companies (21%), municipalities, governorates, delegations and banks (between 10 and 11%), services (post office, water, electricity, hospitals), offices and agencies up to 6%.

On the other hand, the number of complaints filed against Ben Ali and his family represent 0.5% of the total number of cases received by the Commission, i.e. 17.

Corruption has affected the financial, economic and administrative fields. Corruption in companies accounts for 45% of total cases, while those related to individuals are estimated at 37.7%.

The anonymous complaints filed in 2016 with the authority represent 22% of the total number of complaints.

Financial corruption and economic crime take up the lion’s share of the total volume of cases received by the INLUCC.

Government and semi-governmental enterprises rank first with 805 corruption files, or 45% of the total received.

According to the INLUCC report, more than 1/3 of the complaints come from four governorates mainly, namely Tunis, Nabeul, Sfax and Kasserine while 2/3 of the files are divided between the rest of the governorates and abroad whose share is very small with the reporting of only 4 cases of corruption.

The governorates least concerned by the exposure of acts of corruption are, according to the report, Tataouine, Tozeur, Kebili and Medenine.

Chawki Tabib has in another context criticized some parties for not being sufficiently cooperative in terms of exposing corruption.

He drew up a list of departments that did not file any corruption files. These are the Ministries of the Interior, Foreign Affairs, Higher Education, Transport, Public Property and Land Affairs and Industry.

“It is not normal for a ministry to file no corruption file for a whole year,” said Tabib, describing the efforts of some ministries in the field as very minimal and below expectations.

According to the INLUCC report, the ministries’ contribution to the exposure of corruption was the lowest, representing 0.3% of the total number of cases, while legal persons accounted for 66.2%, the workers 3.4%, population groups 3.2%, corporations 2.8%, corporations and unions (2%).

As for anonymous persons, they represent 22.1% of the total.

He said that the war on corruption can only succeed with the collaboration of all parties, including the government, the Assembly, ministries, associations and civil society.