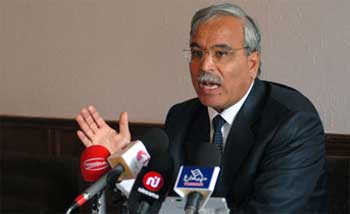 On observance of the World Anti-Corruption Day and the launch of the report of Transparency International for the year 2012 which ranked Tunisia 75th out of 174 countries in the “Corruption Perceptions Index,” Kamel Ayadi, expert in anti-corruption policies, Monday, gave a press conference to analyze the place of Tunisia in this report.

He urged all parties concerned to develop the “culture of fight against corruption,” so as to define “this scourge.” According to him, we cannot change society by decree. Therefore, the fight against this scourge should not be limited to the adoption of more coercive laws, a cultural revolution is necessary.

Ayadi reminded that there are three fundamental factors that were responsible for the spread of corruption in Tunisia. They include the acceptance of corruption as a non-stated social phenomenon, the non-enforcement of laws punishing corruption, and the totalitarian nature of the ruling authority.

Regarding the impact of corruption, the expert spoke of the deterioration of economic and social growth and huge deficits. Corruption and embezzlement are among the major obstacles to development in many countries and are “effective means” to break the law.

“We must find effective ways to fight against this phenomenon, including the implementation of new reforms and continuous control in various institutions,” said the expert.

The expert said Transparency International has released its latest report covering 176 countries in the world, “Corruption Perceptions Index 2012”, and that in this ranking, Tunisia moved down two ranks to the 75th position with a score of 41, knowing that indices are assigned on a scale of 0 to 100, 0 referring to the most corrupt country in the world and 100 the least corrupt country. Tunisia has thus not reached the average.

In the Arab world, Tunisia is ranked in 6th place, while Egypt is in 118th place with a score of 32.

Regarding the dangers of corruption, the expert stated that the consequences of corruption are diverse and cover many areas, including corruption in the business sector, politics and financing of political parties…

According to him, the efficient prevention of corruption requires the application of “mechanisms” adopted globally, with the aim of exposing corruption and preventing this problem, as well as strengthening the role of regulators.