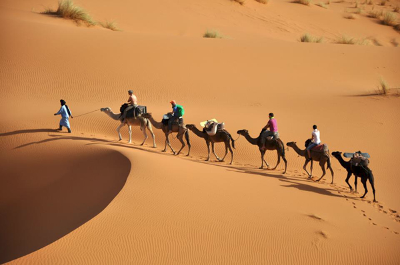 The region of Tozeur hosted on Sunday a Russian delegation including 45 travel agents visiting the country to learn about the Tunisian tourism product and promote Saharan tourism, in particular.
In a statement to TAP, local tourism commissioner in Tozeur, Anouar Chetoui said the visit aims to attract Russian tourists, noting that a first group of Russian tourists will visit the Tunisian south next week.
He added that the Russian travel agents have visited the handicraft souks in Tozeur, museums as well as the
Ong Jemal site located in the Sahara and the mountain oases of Tamaghza, Chebika and Mides.
Visits are also planned to the Jerid as well as to other Tunisian cities.
The local tourism commissioner said the region of Tozeur had also hosted on Saturday a delegation of 25 Chinese travel agents who already visited Ong Jemal and the oases of Chebika, Tamaghza and Midas.
The official emphasized the importance of the Chinese market, in particular and the Asian, in general, stressing the need to adjust the Tunisian tourism product to the needs of this group of tourists who love nature and cultural tourism.
Share
Facebook
Twitter
Linkedin
Email
WhatsApp
Viber
Pinterest
ReddIt
Tumblr
Telegram
Digg
Mix
Print
Previous articleTunisia: German Embassy launches call for projects through EUR 2.502-mln grant fund
Next articleTunisia: number of Canadian tourists to rise from 20,000 to 100,000 per year (M. Zouari)