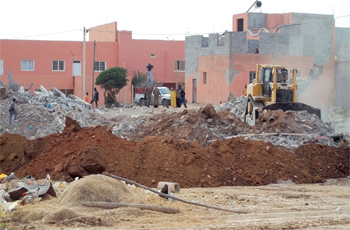 Informal and uncontrolled construction, that is to say those erected without a building permit, spread like a bushfire throughout Tunisia. They sprout especially where it is forbidden to afford a roof, especially in the public domain of the state, and in areas classified as inconstructible. The phenomenon that has become a plague since the Revolution is expanding openly before the municipal authorities, mostly the famous special delegations, visibly hit by inertia, probably for lack of resources.

The fact is that 37% or 29,000 buildings are built in an anarchic way in Tunisia, according to a report drawn up by Nejib Snoussi, Director General of Housing at the Ministry of Public Works who told Africanmanager that the 2014 census results showed that the number of units built each year amounts to 79,000 while the number of authorizations granted is about 50 thousand.

These anarchic constructions are spread throughout the territory of the Republic, mainly in Greater Tunis, Ariana, Ben Arous and coastal areas where population and urban density is high.

Besides the propensity of citizens to flout the law and municipal bylaws, the Administration is criticized for putting in place mechanisms that do not meet the expectations of different social categories while the state is unable to provide social housing in authorized areas.

The high cost of land and complex and cumbersome administrative procedures are also behind the spread of uncontrolled construction, and a call is made to the State to act to simplify redevelopment procedures and grant authorizations as a quick solution to end this scourge.

Already the House of People’s Representatives has before it a bill on the regularization of the situation of constructions non-compliant with building permits. This text seeks the enactment of exceptional provisions, in order to regularize the situation of these buildings by the local authorities and fine violators, namely the private sector, investors, industrialists and tourism professionals. The provisions of this law will be applied to buildings that received a building permit until the date of December 31, 2012.

The government, through its Secretary of State in charge of Housing, said that that Act does not apply to anarchic construction that occurs without construction permits on agricultural lands or in areas not covered by drinking water and electricity networks. It has imposed conditions for the regularization of situations concerning exceeding building permits.

Breaches are not only made by individuals and local residents, but also “promoters” of projects in the areas of health, commerce and industry. In any case, the current strategy in terms of housing will be fundamentally revised to allow low to medium categories have decent housing at reasonable prices.

It must be noted that thousands of demolition orders were taken by the municipal authorities to curb the proliferation of cases of soil occupation and rights of way in the public domain, but few, very few have been executed. Yet the majority of violations have been committed against local residents, neighbors, rights of way in the public domain, including green spaces, banks of rivers …

What is more serious is that buildings were erected in defiance of all the safety rules and standards, which represents a real danger to the occupants and even the neighborhood, not to mention claims that will soon be brandished by the owners of these unauthorized buildings, such as water supply, sanitation infrastructure, connection to the electricity grid, and many other amenities which funding is not in the scope of the State or municipalities whose coffers are mostly empty due to the lack of tax revenue.