Tunisia Mall inaugurated, 2 more will follow in Ennasr and Sfax 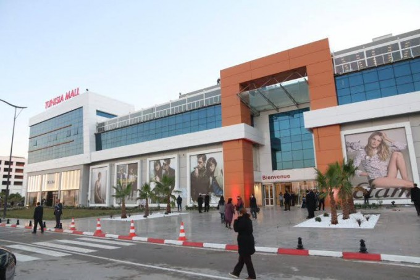 The shopping centre “Tunisia Mall,” which covers 37,000 m², was inaugurated Friday at the “Lac II,” area by Minister of Tourism and Handicrafts Salma Elloumi Rekik.

Investments of around 90 million Tunisian dinars (MTD) have been mobilized for the construction of this centre, besides 40 MTD to equip and develop stores, Director General of the project company “la Sélection de promotion immobiliére” Mohamed Atef Zahani told TAP.

Tunisia Mall, which has generated 1,000 direct jobs, will house 80 stores of internationally renowned brands, including fifteen which are opening for the first time in Tunisia.

The objective of this centre is to provide a commercial offering different from the usual one likely to develop Tunisian tourism.

He said, in this context, that a proposal will be submitted to the Ministry of Tourism to ask for applying the principle of tax refund for foreign tourists to encourage them to go shopping in Tunisia.

Zahani said two other malls are planned by the company: Tunisia Mall-Ennasr and Tunisia Mall-Sfax whose works will begin in the first half of 2016. The opening of these shopping centers is scheduled for October 2018.