HomeNewsTunisia, member of COMESA, could not have started a better way
News

Tunisia, member of COMESA, could not have started a better way 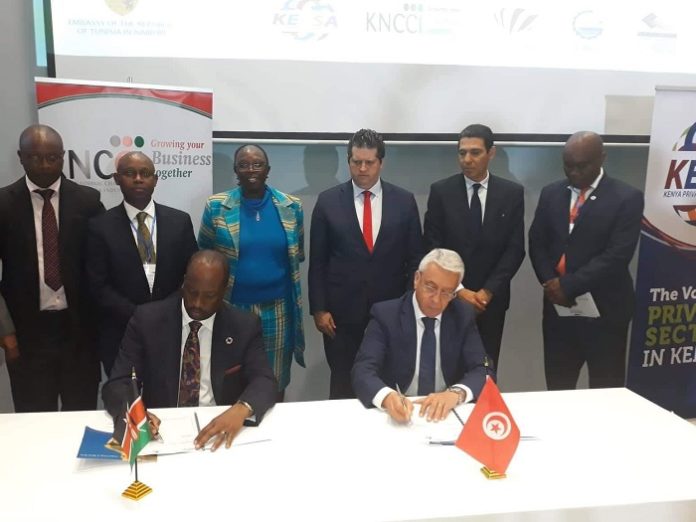 The Tunisian-Kenyan Business Forum started on Thursday in Nairobi (Kenya), as part of the Tunisian business mission to Kenya (March 19-21), the Tunisian Export Promotion Centre (CEPEX) said in a statement Thursday.

The forum was attended by around fifty business people making up the Tunisian delegation led by Minister of Trade Omar El Bahi, as well as a hundred Kenyan business operators from several sectors of activity, including the plastics industry, the electricity industry, the food industry, the mechanical industry, higher education, health and telecommunications.

The Forum’s program included the inaugural ceremony during which Kenyan and Tunisian officials presented the business climate and investment opportunities in both countries, particularly in Kenya (a country in the midst of economic revival), besides well-organized networking meetings and B2B meetings with key Kenyan operators, followed by company visits.

On the sidelines of this forum, two partnership agreements have been signed: the first between the Chamber of Commerce and Industry of the Midland (CCIC) and the Kenya National Chamber

of Commerce and a second between Tunisian Confederation of Industry, Commerce and Handicrafts (UTICA) and Kenya Private Sector Alliance (KEPSA).

This Tunisian prospecting mission to Kenya is organized by CEPEX, UTICA and CCIC, in partnership with the Tunisian Embassy in Nairobi.

CEPEX’s network of representations abroad was strengthened at the end of 2018. The choice of this country is part of the state’s strategic orientation to make Sub-Saharan Africa a preferred destination for exports.

Kenya Has the Fourth Fastest-Growing Ultra-Rich Population in the World. Indeed, the population of Ultra high-net-worth (UNHW) has increased by 11.7% in this East African country in just 5 years between 2012 and 2017, against 8.1% in the United States.

Kenya is a country open to international trade and trade accounts for nearly 40% of the country’s Gross Domestic Product (GDP).

The country remains engaged in trade liberalization through its membership in the World Trade Organization (WTO), the Common Market for Eastern and Southern Africa (COMESA) and the East African Community (EAC) which includes Kenya, Tanzania, Uganda, Rwanda and Burundi.

With these, Kenya signed an agreement to set up a monetary union in December 2013.

Nigeria’s foreign reserves up by 3.98%