HomeFeatured NewsTunisia: the economic record of Chahed in 5 graphs, according to El...
Featured News

Tunisia: the economic record of Chahed in 5 graphs, according to El Kasbah 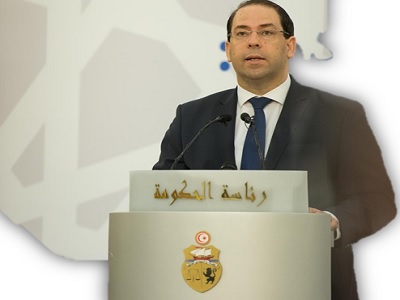 On Monday, August 27, 2018, Youssef Chahed “celebrated” in a deafening silence on his record his second year at the head of a government from which some are stoically waiting for his fall and others are eagerly awaiting it.

At El Kasbah, he received the Dutch ambassador for an unknown reason, met the Japanese State Minister of Economy who had come to ask for Tunisia’s support for his country’s bid for the organization of the World Expo and had talks with the father of his worst enemy on economic, social and security issues and preparations for the next school and university year. Move along, there’s nothing to see here”, we may say.

The economic balance sheet, seen from the side of El Kasbah

Without pouring to self-flagellation, or self-destruction – as we would be pushed to do by some anomalies in managing the economic and financial crisis Tunisia has been experiencing since 2012, such as the lack of certain drugs, the delay of retirement pensions , the new clashes of Ben Guerdane displeased with the fact that the Libyans close their own borders or the currency reserves that melt like snow in the sun – we asked the communication services of the Kasbah to enlighten us on the balance sheet of the head of the government. It is here summed up in five rather expressive slides that have almost no need for comment.

The success, economic, is certainly obvious, even if it is still only slightly perceptible by a population with expectations beyond the means of the state and its ability to return to work and to increase effort.

It is a little more in terms of security and the fight against terrorism with some extra-urban attacks and many others thwarted by an effort of anticipation. And we need to stress that it is not little.

The fight against corruption is carried out with drums beating by the INLCC and spares no one. Growth is certainly not yet inclusive, nor is it creating enough jobs, but has the merit of being there with its tangible signs of recovery, as highlighted by more than one international body. To say that Chahed succeeded in his term seems to us to be just as absurd as to say that he has missed everything.

What Chahed and his substitute (s) should have done

To succeed, he would need, as for any other head of government who would take his place, a political safety belt and not the current one he has. He would need true social partners and not the UGTT with which he is stuck and UTICA which is waddling and promises more investment than it achieves.

He would need more real businessmen than lobbyists or profiteers. He would require more work and fewer civil servants, more workers than aid and grant seekers and more projects and FDI than strikes.

He would need a CPG other than the current which is perpetually dreaming of more pay and less labor.

He would need a parliament that passes more bills than it discusses in Byzantine way, deputies other than those who insult all and go down in flames and who are more focused on the effort than criticism.

He would need more Muslims than Islamists, more moderates than “CPRists” or leftists.

He would need, like any other person sitting in El Kasbah, more business in the industry than in pessimism and self-destruction, more Tunisians who believe in their power to change things through work than in the only divine power, as peddled by those who say they fear it, to change things into a night.

But also, more statesmen than politicians, more activist volunteers than those who ask for the price of their battles and more citizens who think about what they can give to the state than what the State could give them.

In a word, Youssef Chahed and anyone who will replace him need by all that does not currently exist in post-revolution Tunisia, and that those who believe they have made it, will not let it be achieved. Time is money. And Tunisia is losing them both.

Tunisia: domestic flights to Gafsa and Gabes to resume in December

Sudanese President describes US sanctions on his country as immoral