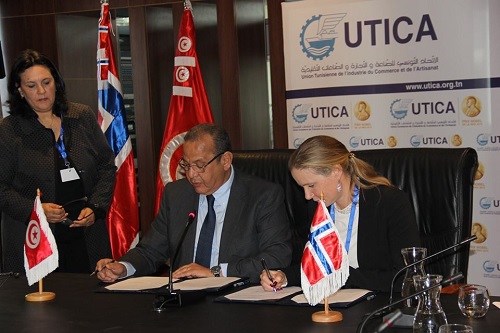 The Confederation of Industry, Trade and Handicrafts (UTICA), on Monday, signed a five-year partnership agreement with the Confederation of Norwegian Enterprises (NHO) to strengthen socio-economic relations between the two countries.

The partnership agreement, which was signed at a Tunisian-Norwegian business meeting, is of special importance in the development of Norwegian investments in Tunisia during the next period, said UTICA president Samir Majoul.

He called on conducting similar agreements to promote the sharing of experiences, especially since Norway has significant expertise, particularly in the sectors of renewable energy, privatization and development of public enterprises, fish farming and the timber industry.

Norway places high interest in Tunisian skills, Majoul said, deeming it essential to take advantage of these agreements to promote the integration of Tunisian graduates in European countries and to provide necessary financing for their projects.

7 Norwegian companies are currently operating in Tunisia namely in the industrial and service sectors, he said, adding that they employ 200 people.

She pointed out that her country is working to develop a program to support women in the next five years, which will help enhance the presence of Tunisian women in positions of responsibility and leadership.

Tunisia-Tourism: early signs that make you want to go to South...

Tunisia may drift into authoritarianism in 2018, says International Crisis Group