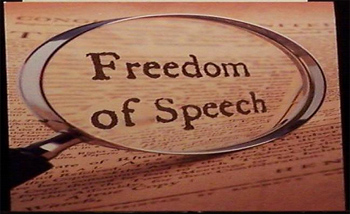 With the remarkable rise of terrorist operations in Tunisia, Mehdi Jomaa’s government took a series of measures to eradicate terrorism. However, many politicians, journalists and human rights activists have expressed their concerns about the impact of the war against terrorism on freedom of expression in Tunisia.

Mustapha Tlili, a former leader of the Tunisian League of Human Rights considered as positive the recent efforts by the government in the fight against terrorism and said that the state plays a key role in protecting citizens against all hazards that could threaten them.

Responding to a question about the fears of some human rights activists at the risk of undermining freedom of expression in the name of eradicating terrorism raised by journalists, politicians and activists, he said the safety of citizens must be ensured without affecting freedom of expression. “Terrorism remains a real threat to Tunisia, and it is in this context that the State is called upon to protect the country while respecting human rights.”

Nabil Jmour, Secretary General of the General Union of Culture and Media said, in a statement to Africanmanager that freedom of expression for journalists and civil society activists…is a red line not to be crossed by the government.

According to him, the government, in its fight against terrorism, is called to ensure the protection of the country against any danger that might threaten its security. However, the respect for human rights is a priority. “We are in a war against terrorism, the State must play an important role in this struggle and, for our part, we are also called to be vigilant not to repeat the same scenario of the former regime,” he added.

Banning access to websites is a suppression of freedom of expression

According to Ahmed Kaanich, human rights activist and former Human Rights Watch activist, the war against terrorism could cause bad impacts on freedom of expression and the return to the former dictatorship of Ben Ali. “It is true that the fight against terrorism remains a priority; however, it could mean bad impacts on freedom of expression. For example, the Tunisian authorities intend to prohibit access to some websites, and it is not a good solution to fight against terrorism, it is another form of suppression of freedom of expression and it reminds us of the dictatorship of the former regime of Ben Ali. Moreover suspicious people can use the “proxy” to surf in secret. They must be controlled remotely without limiting access on the web,” he said.