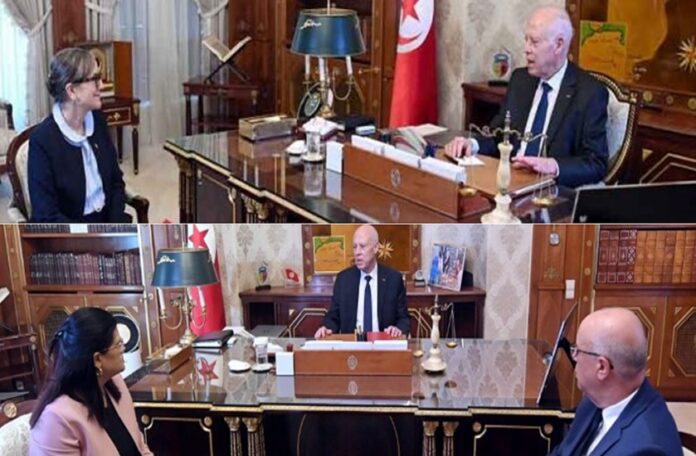 At his meeting with the Prime Minister on Tuesday, Tunisia’s President mainly discussed the report prepared by the Ministry of Finance on the results of the mission of audit on loans and grants obtained by the state and public enterprises in Tunisia over the past ten years. This meeting was, the next day, followed by another by the Head of State with the Minister of Finance and the Governor of the Central Bank of Tunisia (BCT).

Kais Saied’s concern for this issue of loans is not new. He had already wondered as he received World Bank’s Vice-President for MENA Ferid Belhaj on February 15, 2022, “about the fate of these loans and grants, estimated at billions and billions. We must look at the loans and grants made to Tunisia since 2011, and there is no trace in the state coffers. This is not to mention the money that is transferred abroad in suitcases and trunks under the guise of immunity enjoyed by some,” he at that time indicated.

– The silence of the figures

The audit was carried out by the henchmen of the famous CGF (Contrôle Général des Finances). The Ministry of Finance’s bloodhounds, known for their expertise and uprightness, have already knocked many heads in silence. A monastic silence, similar to the one that currently reigns on the complete report of this audit, and on the amount of loans that would be problematic, as well as on the list of suspects, although one of them is already known in the case of the Chinese donation and whose case in court is running for years.

The CGF audit report, of which we were able to read just a summary, listed 325 external loans given to the Tunisian state, 113 donations for the state as well, and 99 others granted to state enterprises. The only conclusion that could be seen in the brief summary of that report is that 43 loans could not be put to use.

We will not know more. Where did they go? Where was it spent? Who diverted what, with whose help, when and for what purpose? At the Kasbah, it is “Fort Knox”. In Carthage, one should first have someone to talk to in order to ask the question. The entire report seems to be a state secret.

The Ministry of Finance is indeed silent on the amounts of these loans and donations from which the Tunisian state has benefited over the past ten years, the amounts audited and those that would have caused problems. A discretion, rather a dead silence, which is not always well received by a population that always hears the head of state speak, and would like to know the end of this story and the real culprits. And it will not be tomorrow that those who ask for access to the CGF report will get it! The stakes are too high for now, for Tunisia and not for Kais Said, for such revelations.

Who is guilty and of what? What is the status of the Chinese grant?

From what we could see of this report, the audit work detected “shortcomings, gaps and failures that have marred the implementation stages, and which have led, in some cases, to referring files to the courts, including the Chinese donation.”

The report also mentions “shortcomings in the optimal use of external resources, the lack of control over deadlines, which increased the cost of some credits, the decline in the rate of consumption of these resources within the time allowed, and sometimes the cancellation of parts of these resources.

Carelessness and imperialism on the part of the Administration and the State in Tunisia?

Perhaps! But nothing that can constitute facts liable to criminal sanctions, except the case of the Chinese donation in which is suspected the former minister son-in-law of Rached Khriji (ar).

This is our first conclusion from what we have been able to learn. The second conclusion is that, without a doubt, and with the CGF’s evidence to back it up, the Tunisian administration is not involved in embezzlement or other misappropriation of funds. There is mismanagement certainly, in the broadest sense, and conducted in the “easy in the morning, not too fast in the evening” way.

– A financial cost, nevertheless not negligible for the State

We will not go so far as to say “all for this”, because the failures identified by the CGF during the audit of these donations and credits, have led to a financial cost for the Tunisian state. It is indeed little known that any extension of disbursement deadlines has a financial cost on the recipient of the credit. A cost that can sometimes triple compared to the agreed cost. A cost also on the interest rate, or the imposition of additional commissions, usually withheld at source by the donor or creditor.

Another problem, which also generates financial costs, direct or indirect for the Tunisian state, the low rate of consumption, because of inability to use these funds granted in donations or loans, following the emergence of land, administrative, or procedural problems. Problems, which generate additional costs of 3% for the state. All this, not to mention that any delay in the withdrawal or postponement of loans for a project, can destructure the initial scheme of that project, just by the additional costs of raw materials and other costs. With the possible exception of the case of the Chinese donation of USD 1 million, the CGF’s audit contains more of these kinds of remarks than irrefutable evidence. In our opinion, therefore, there was certainly enough to whip a cat, but not all cats!