CPG can not alone deal with regional unemployment 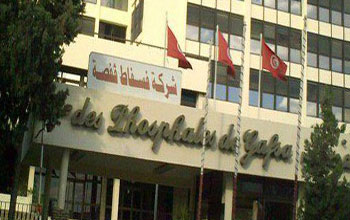 For 2014, forecasts of the Gafsa Phosphate Company (CPG) assume a production of 5.5 million tons, or 80 % of the capacity of the company, which still faces many challenges.

The objective is doubled compared to the previous year when the company has materialized only 40% of its capacity, i.e. a 10% gap compared to the “conservative” hypothesis put forward at that time.

Achieving 70 % of the capacity remains uncertain in a particular climate where protests and sit-ins have continued to accentuate over the past three years, since the fall of the Ben Ali regime and the advent of Revolution.

Protests were driven by job claims in the mining area, in particular, an area in which the only hope of all the inhabitants of the region is to access employment in the CPG.

The people of Gafsa should be understanding

“It is legitimate to claim jobs, but the company can not alone solve this thorny problem which remains the responsibility of all stakeholders,” said Nejib Mrabet, CEO of the Company, who emphasizes that the CPG has honored its commitments regarding recruitment, particularly with the establishment of a subsidiary firm “Environment company” and “Mining Products Transport Company.”

According to him, CPG’s contribution to development in the region is significant with the Development Center of Gafsa and the Fund for Retraining and Development of Mining Centers (FRDCM).” However, with a modest profit for the past three years, the company can not replace the State in the development of the region,” noted Nejib Mrabet.

In a particular context where the company might show a loss similar to the one recorded during the 3 years of the revolution, i.e. 3 billion dinars, the challenge is daunting and the preservation of the activity of the company proves a necessity.

“The recruitment will not stop. Instead, the operation will be backed up, especially with the expected retirements. Moreover, the recruitment of 1916 on behalf of environment companies in the mine basin is underway,” said Nejib Mrabet, before adding “the important thing today is to ensure the business continuity of the company, which is regarded as an engine of development.”

The head of CPG urged locals to be more understanding and supportive to transcend this critical step. “It is important to understand that different companies working in the area of phosphate could not recruit outside their capacity, knowing that the sector pays the wages of 27,000 people, including 14,000 working directly,” he noted.

Soon, an agreement between environment companies and institutions in Gafsa

Speaking of competitions of environment companies, whose results were postponed, Nejib Mrabet noted that efforts continue to address the current situation and find a suitable compromise. “It is useful to clarify things for the people so that they know that the company may not exceed the limits in terms of recruitment.”

Despite all this, the manager is optimistic stating that a cabinet meeting should be held to encourage all concerned environment companies to protect environment in the region of Gafsa.

Share
Facebook
Twitter
Linkedin
Email
WhatsApp
Viber
Pinterest
ReddIt
Tumblr
Telegram
Digg
Mix
Print
Previous articleTunisia: EU approves project for stronger environmental governance
Next articleMezri Haddad to Africanmanager :The new constitution is a masterpiece of hypocrisy and over half of the articles does not deserve to be included.

Tunisia: 34 groups of Russians tourists expected in Djerba this week...