HomeInterviewElyes Fakhfakh: We must break the spendthrift spiral!
Interview

Elyes Fakhfakh: We must break the spendthrift spiral! 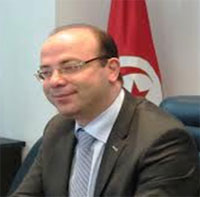 Interviewed by AfricanManager on the sidelines of a recent plenary session at the National Constituent Assembly (NCA ), Minister of Finance, Elyes Fakhfakh said that the economic situation is not catastrophic, but difficult and presents certain dangers, hence the obligation to move towards a policy of spending control in terms of compensation and payroll.

The Minister of Finance also spoke of the decision to impose a 10% taxation on “off-shore” companies as well as the public service, announcing hiring freeze for 2014.

To what extent can we say that the current economic situation in Tunisia is catastrophic?

We cannot say that the situation is catastrophic. It must be said only that we are going through a period of transition that makes the economy tough since the engine of growth does not operate normally in terms of export and investment. Thus, the stability of the growth rate has an impact on the cash flow to the state, especially since, during the last three years, we went through a spending spiral particular at the level of the payroll and compensation expenses, which rose by 80% overall, increasing the current budget deficit to 7.4%.

Of which solutions can we speak today?

We need today to restart the engine of the economy and growth, control public spending and implement reforms at the level of the compensation fund while reducing its size and better orienting it. We also need to increase state revenue and complete the tax overhaul to make taxation fairer.

We cannot speak of a catastrophic situation. We are moving from a difficult situation to a situation that is dangerous. The situation is considered catastrophic when you arrive at a time when you can no longer invest, when you are insolvent, where you have no revenue and no where there has been a negative growth. We are not facing this situation right now.

It is, rather, a policy of spending control in terms of compensation that has taken very significant proportions. The point is also to control the increase in the payroll which rose 50% and that should be kept at a reasonable level. The objective is to guide the result of spending control and increased tax revenues to public investment, especially in regions and infrastructure. We want to enter into a phase where the budget should be a budget of saving, rigor in terms of expenditure and especially shift towards investment rather than consumption.

Several experts have rejected the decision to tax “offshore” companies especially since many foreign investors have put the key under the door to invest in competing countries What do you think?

We increased the tax rate by 10 % for exporters and reduced it by 5% for all companies (local or totally exporting). Today, the investment decision is not based either solely or primarily on the tax benefit that is currently at the seventh position in investment decision.

What then motivates the foreign investor?

Foreign investors pay attention to infrastructure, the environment, the simplification of administrative procedures and the effectiveness of the administration, as well as the quality of the operators, workers and managers, and of course, the tax benefit which is still beneficial.

There are people who are unhappy and who said they are not willing to pay this tax revenue, but the state looks in a comprehensive manner and focuses more on the general interest of the country. Currently, it is the taxpayer who pays the losses of tax revenue from export. It is time to apply this decision announced 5 years ago. I’m sure if we end this period of transition and complete the structural reforms on the financing side, investment and law and if the investment budget is increased, more foreigners will come in droves, and with this same tax rate.

You have opted for targeted compensation, are there not any concerns of not targeting poor families?

The project is under study at the INS and the Department of Industry regarding fuel and energy, while for the commodity, the study is at the Department of Commerce. We must analyze who consumes what and how much and identify how to target reduction for the middle class and suppression for the underclass in a gradual and convenient way. Until then and for the next year we will introduce hundreds of measures for energy-consuming companies to reduce the cost of the use of electricity and gas. Other more targeted adjustments will also emerge, pending the establishment of a comprehensive plan for all households and all categories of consumption.

Yes, the wage bill has increased by 50 % between 2010 and 2013, hence the need to enter a phase of control so that this rate would be classic, ranging between 4 to 5%. We need to optimize recruitment and control wage increases.

No! There will only recruitment to replace retirees.

Without reforms, transition to democracy would always be compromised, says Abdelbasset...