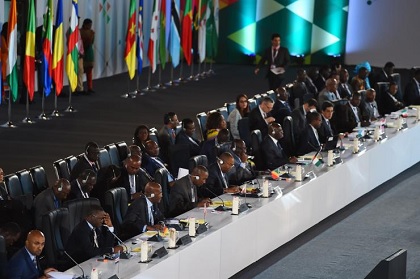 Joël Morgan, Minister of Foreign Affairs and Transport, represented President James Michel at the Third India Africa Forum Summit, held in New Delhi, on 29th October 2015. The India Africa Forum Summit created a platform for cooperation between India and African states under the aegis of the African Union. With its first Summit held in 2008 in New Delhi, followed by a second session in Addis Ababa in 2011, the 2015 India Africa Forum Summit reaffirmed the commitments of India and the African states to continue to work closely on issues of mutual interests and mutual benefits. The theme for the 2015 session was “Partners in Progress: Towards a dynamic and Transformative Development Agenda.

In the statement delivered by Ambassador Faure on behalf of Minister Morgan during the Ministerial Session on 28th October 2015, Ambassador Faure focused his interventions on issues of great importance to Seychelles as an African country and India such as trade, climate change, security and Blue Economy. In relations to the strong ties between India and Africa, Ambassador Faure highlighted the devotion of both parties to contribute more strenuously to growth and prosperity through enhanced collaborative efforts across many fields. Ambassador Faure further noted the urgent need for “a new dynamism in South-South Cooperation”, to “face up the global challenges that are threatening our collective future.

The Summit recognised the need to put in place a strong monitoring mechanism to ensure that agreed projects are implemented in a timely manner.