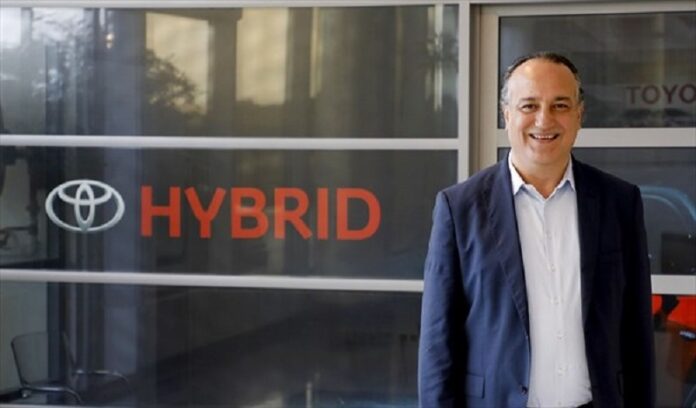 It is a brand that managed to top global car sales in 2021 for the second year in a row. It also ranked third in the rate of local sales. It is the Japanese giant “Toyota”, which swept the international and regional markets thanks to a variety of products and a continuous renewal of “hybrid cars.”

President and Chief Executive Officer of the Toyota branch in Tunisia, Moez Belkhiria, confirmed in an interview with “African Manager” that the Japanese brand had managed in 2021 to break into the third place in the rate of local sales thanks to the diversity of its products and its differential prices. This is besides the “Tunisian customers’ awareness” of the advantages of this brand in terms of continuity and control of fuel consumption, especially after the rise in fuel prices in the global markets.

Hybrid cars prove their worth in Tunisia

Belkhiria said the “Toyota” brand has proven its worth in the Tunisian market in the sales of hybrid cars, stressing that there is a high demand from Tunisians for this type of cars, whether for “Toyota RAV4” or the new “Toyota Cross”.

He stressed that the Tunisian customer has gained experience in the ability of this type of car in terms of rationalizing fuel consumption, besides the tax privileges that this type of car enjoyed in the Finance Law 2022. This included a 50 percent reduction in the tax rate on vehicles equipped with a thermocouple and electric motor (passenger cars, utility cars and twin cars) instead of 30 percent.

Hybrid cars have gained great popularity in recent times, as they took the lead in sales in many countries of the world due to several advantages enjoyed by these types of cars, as they provide their driver with a smoother driving experience in addition to providing less fuel consumption while reducing the rate of harmful emissions resulting from fuel combustion.

The name of this type of car “hybrid” is due to its combination of two systems in one car, namely the electric car system and the fuel car system, where the “integrated starter generator” works with the effectiveness of the engine in order to reduce fuel consumption, especially in driving within cities and in cases of congestion.

It also helps this car to control more power as the integrated starter generator boosts the combustion engine to charge the fuel engine.

One of the advantages of hybrid cars is that if their speed does not exceed 60 km per hour (usually in the center of the country), they use the electric motor, which is automatically charged through a “battery” charged by the fuel engine.

On the other hand, the President and CEO of the Toyota branch in Tunisia considered that 2021 was an exceptional year in terms of local market sales, as 4,750 cars were sold, making a qualitative leap for the brand in the local market.

The same source revealed that the brand sold about 350 hybrid cars out of the total number of cars sold by the Japanese brand in Tunisia.

Belkhiria pointed out that the development seen by the brand in the Tunisian market indicates the confidence that it has gained over time in terms of quality, price and after-sales interest.

He said that despite the high demand from Tunisian customers to buy the hybrid car, its production level is considered weak due to the fluctuation in the global market as a result of the lack of what is known as semi-conductor devices.

Our interviewer did not deny the existence of difficulties faced by his brand and even the rest of the other brands at the beginning of 2022 due to the lack of the mentioned chips as a result of the coronavirus pandemic, as all car manufacturers are suffering from a shortage of production, which affected the pace of meeting the demands of suppliers in all countries of the world.

Belkhiria said he was not optimistic about this year’s return compared to the previous one, despite the success achieved by his brand at the global and local levels. Indeed, he did not expect that the local market, even the international one, would witness an improvement by the end of 2022, which requires special handling of the situation, as he put it.

Belkhiria believes that the second problem faced by his brand this year is the quota system in force in Tunisia by the Ministry of Trade with regard to all car suppliers. He considered that their brand has endured an injustice as it did not unfairly benefit of an increase in its share in the local market, contrary to the laws regulating this sector.

The same source stressed that laws and customs indicate that if a certain brand is able to advance in sales rates, which means that it is demanded by customers, then the line Ministry and the Chamber of Car Dealership Agents will automatically increase their share in the Tunisian market “and this is what was not applied for Toyota despite the remarkable development in its sales and its third place locally,” he noted.

In the same context, he explained that their brand had sent a correspondence to the Ministry of Trade about this illegal issue, recalling that the quota system was not in line with the requirements of the market and customers.

He said: “We are in the year 2022 and we are still in Tunisia dealing with the quota system, so let us leave the customer the freedom to choose.”

In a related context, Belkhiria spoke about TICAD8, which will have positive repercussions on the level of trade between Tunisia, Japan and even other African countries, according to his assessment.

The same source hoped that Tunisia would take advantage of the opportunity of this outstanding forum “TICAD” to develop its legislation in the field of investment to attract Japanese companies.

There is actually a desire by the parent company “Toyota” to invest in Tunisia, especially in the field of manufacturing pickup trucks through the installation of a factory for this international brand in our country that is specialized in the automotive industry, he indicated.

He described the negotiations with the Tunisian side in this regard as very advanced, pending other meetings soon between the Tunisian ministries of industry and trade and a senior official of the company who will soon visit Tunisia.

Belkhiria expressed hope that Tunisia would be able to attract the first “Toyota” car factory in the world, because of the importance of Tunisia’s image abroad in the field of automobile industry and its components.

Director General of Manufacturing Industries at the Ministry of Industry, Fethi Sahlaoui had stated that Tunisia seeks to attract international automobile manufacturers, but this requires many improvements in infrastructure and ports, besides providing a logistical area.

Tunisia would move into industrial recession.