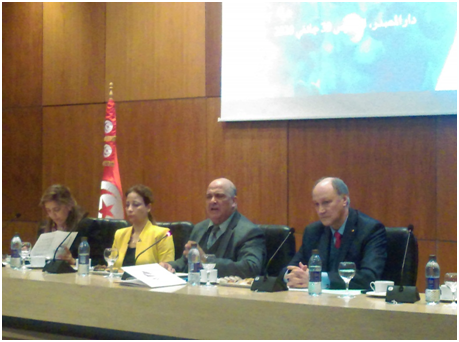 Tunisian olive oil is very appreciated, not only locally, but also internationally for its quality, taste and price. Tunisia is the main olive oil producing country outside the European Union, and ranks 4th in the world after Spain, Italy and Greece. It is therefore the first country in the world that has an organic olive oil.

To boost the export of this high value-added product, Tunisia’s Export Promotion Center (CEPEX) organized, on Thursday, January 30, 2020, a press briefing in the presence of senior officials and professionals to announce the launch of an urgent strategy to capture international markets.

During his speech, Youssef Neji, CEO of CEPEX said “the Tunisian olive sector is of great importance in the revitalization of the national economy, since it represents a real source of income in foreign currency for the country”.

He added that “an action plan has been put in place to strengthen the competitiveness of the country’s companies operating in the olive sector to ensure a better positioning of packaged olive oil on international markets”, without further details.

He also affirmed that “although we do not have all the means, we are multiplying all our efforts to promote the Tunisian agricultural product, and this through the organization of fairs, business missions abroad and participation in agro-food fairs to market Tunisian olive oil” the CEO of CEPEX stressed.

Indeed, the manager insisted on the importance of adopting new approaches such as the reduction from 50% to 70% of the costs of sea and air transport to all international markets, such as Japan, America, Canada, Brazil, Russia, Sweden, Finland, Saudi Arabia…

For his part, Trade Minister Omar Behi said that his department encourages farmers, companies operating in the olive sector in their strategy to promote Tunisian products.µ

“The olive-growing sector is among the country’s most important natural sources and contributes to Tunisia’s economic growth. We support all investors and farmers and we are always listening to your proposals,” he assured.

According to official figures recently announced by the Ministry of Agriculture and Water Resources, the olive-growing sector has 320,000 producers, 1,674 oil mills, 16 oil refining units, 80 bottling units and 200 exporters including 70 in packaged oil to 54 international markets.