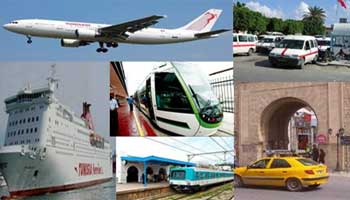 The transport sector plays an important role in achieving development goals and strategies and supporting other productive sectors and enhancing cost-efficiency.

The Department of Transport recommends remedying the shortcomings of the old development model which was unable to absorb job applications from graduates because of its shortcomings in terms of creativity and innovation.

It seeks, in this regard, to continue strengthening and modernizing airport infrastructure, promote the quality of services, enhance security and simplify procedures.

In the next step, efforts will also focus on increasing the share of the transport sector in the gross domestic product to 8.5% to reach the level of European Union (EU) countries (10%) and some emerging countries, such as Turkey.

The different modes of transport can create new jobs and promote regions if the adopted programs are implemented. The sector’s professionals expect to employ 14,707 workers in the land transport sector, including 8,278 employees by private operators (56.3%) and 6,429 by the public sector (43.7%) during the period between 2011 and 2014.

In addition, 826 will be recruited in the maritime transport activities during the period between 2012 and 2015. It should be noted that the transport sector provides 135,000 direct jobs, 83% of which in the land transport sector.

Maritime transport and port activity provide about 6,107 direct jobs, including 3,907 jobs in the public sector and another 2,200 in the private one. The air transport sector provides 14,000 direct jobs.

It should be noted that the development of logistics will, alone, help create 35,000 jobs in the long and medium terms, nearly 20,000 of which will be direct and specialized, and this once the logistics strategy is implemented.

Quality in the transport sector is no longer a luxury, but a necessity if local companies want to compete with foreign ones.