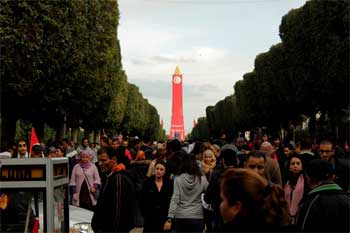 Noureddine Zekri, Secretary of State for International Cooperation said at a press briefing Tuesday that nearly 43 million dinars were mobilized (40% for wages) and the operation is to take place over three weeks. Preliminary results are expected in late July and comprehensive results are due in December 2014.

More than 18,000 people, 90% of whom university graduates, were recruited to gather demographic data in full discretion and neutrality in processing data and reporting.

The new census will allow Tunisia to adjust its policies, programs and strategies while relying on new and more accurate data, according to Zekri.

Nearly 4,000 observers and 650 staff members will be involved in the operation. The results of the census will focus on several aspects, including habitat and its features , the family and its composition, demographic, educational and training information, living standard, immigration, new information technologies … New data will also be taken into consideration, namely the elderly, the disabled and social welfare.

Noureddine Zekri said, in this regard, that the results of the census will adjust several data and enrich the census structure of inhabitants with new integrated data to keep pace with the development of the Tunisian society.

According to the Secretary of State for International Cooperation, 24 cars were purchased for this purpose, with the aim of allowing interviewers to carry out their work, noting, however, the lack of 350 to 400 other cars while needs are estimated at nearly 2,100 cars.

He spoke, in this context, of the possibility of signing agreements with companies with which car rental contracts were already signed or with ministries and public structures.

Moreover , after the first phase of the general census of population for 2014 on logistical and material preparations , the number of Tunisian families surveyed to date has reached 2 million 800 thousand.

With regard to the dismissal of the Director General of the National Statistics Institute (INS), Jalel Ben Rejeb, Noureddine Zekri said the decision was taken more than one month ago as part of the review of appointments made by the Troika.

He, however, explained the delay in the official announcement of the departure of Ben Jalel Rejeb while the decision to dismiss him had been taken more than a month ago, by the difficulty of finding the right person to take over and not to disturb the smooth running of the census.

Noureddine Zekri noted , moreover, that this decision hardly affects the personality of Jalel Ben Rejeb who was aware of this change, noting , however, that the appointment of directors is not only based on intellectual skills but on a range of other criteria.

Tunisia: exports increased by only 4% in volume at end of...