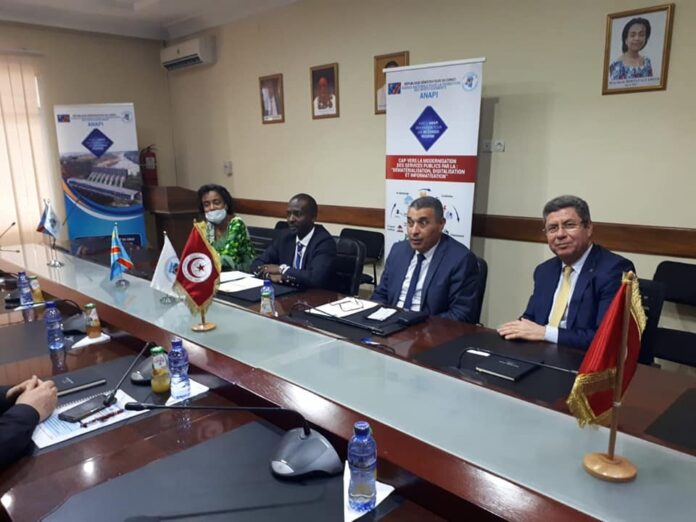 The “Agence Foncière lndustrielle” (AFI) has signed a memorandum of understanding with the DR Congo’s National Investment Promotion Agency (ANAPI) in the field of industrial zone development.

Under the agreement, AFI will make its expertise available for the development of industrial zones in undeveloped sites in Congo, through their delineation, the realization of studies and the presentation of projects in the land field.

This is besides, sharing experiences, including training, under this MoU initialed by the CEO of AFI, Souheil Chéour and Director General of ANAPI Anthony Nkinzo Kamole, on the occasion of the Tunisian economic business carried out in Congo from 22 to 25 March 2021.

The International Land Company of Tunisia (SOFIT), created in early 2018, allows the Agency to export its expertise and national services in the field of land and its various components (housing, industry and technology), at a time when the agency is working to access the Congolese market, given the significant opportunities it offers in this area.

The SOFIT was created with a capital of 10 million dinars to which the public sector has contributed up to 40% and the AFI at a rate of 33% and private operators with a share of 60%.

The AFI will initially choose, under the same MoU, 4 sites in Congo, including a site in the capital and three others outside it, to take the first steps to define the industrial land, before designing the feasibility study and the file of subdivision as well as the connection to road networks, drinking water and electricity, said Cheour.

He added that the Congolese Minister of Industry has reaffirmed his country’s willingness to draw on the Tunisian experience in the field of land, to develop a number of industrial zones.

This bilateral cooperation aims to promote projects in the areas of processing industries, crafts, small trades and services in the Republic of Democratic Congo (DRC).

The two sides therefore committed to work together to improve investment and projects in the industrial land sector in both countries.

The ANAPI is committed, in this framework, to facilitate access to information, define suitable sites for the establishment of industrial zones and make recommendations to the central and regional authorities concerned.

The forum was organized in cooperation between the Tunisian Embassy in Kinshasa and the Tunisian-African Business Council (TABC) in order to boost exports between Tunisia and the DRC, so as to bolster bilateral trade, consolidate economic relations and raise awareness of the business climate and investment opportunities in this African country.

The DRC, the second largest African country in terms of area after Algeria, shares its borders with 9 countries, which allows it to become a regional platform. This country has more than 100 million consumers.

Tunisia-new Executive Board of UGTT: Change in the Air!