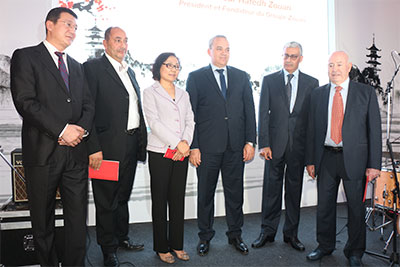 The Zouari Group organized on Friday, November 19, 2016, a ceremony marking the launch of buses of Chinese manufacturer King Long on the Tunisian market.

In his remarks, Hafedh Zouari, president and founder of the Zouari group, affirmed that “the King Long buses will carve a place of choice on the Tunisian market. They distinguish themselves by taking real account of the specificities of the market and offer an interesting compromise between performance, reliability, durability, comfort and technology “, he said.

For her part, the Ambassador of the People’s Republic of China to Tunisia, Mrs. Bian Yanhua, welcomed this new Tunisian-Chinese partnership and affirmed that the marketing of one of the most famous brands of the bus industry In China is only a reflection of the development of cooperation between Tunisia and China and the consolidation of the friendship relations between the two countries.

She also added that the Tunisian-Chinese relations are progressing remarkably thanks to the different cooperation between the two countries in various fields.

Medicars will be able to manufacture and market buses meeting the European standards and the standards of the highway code in Tunisia, with the possibility to offer customers a multitude of options regarding the choices of the drivetrain and bodywork equipment , and a much more affordable price than that offered by other manufacturers.

With an estimated investment of 8 million dinars, this bus camber production unit, expected to start at the end of 2017, will produce 150 buses per year and will create 150 new jobs.

Tunisia: the road to economic recovery, according to President of UTICA