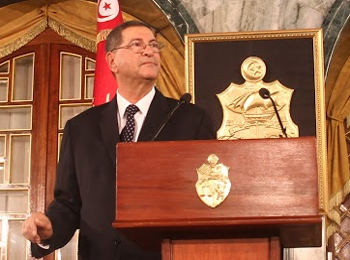 Tunisia saw a few weeks ago the advent of its second Republic. It has a new president, but also a new head of government who still does not govern. The situation is even more delicate than that of Jomaa who is put on hold and contents himself with dealing with current business.

In fact, the New Republic is still waiting for its new government and all seems frozen in anticipation of this new team.

In this perspective, Habib Essid is stepping up meetings while leaks about names of candidates for different ministerial portfolios proliferate. Meanwhile, the president’s party, Nidaa Tounes, disputing seats, is tearing itself apart because of the composition of the government.

The first to express his discontent about Beji Caid Essebsi’s decision to exclude MPs of Nidaa Tounes from the list was Said Aidi.

The last to do so was troublemaker Khmaies Kessila who criticized on a private radio his party’s behaviour towards its rival Ennahda and compared Nida Tounes to CPR that split after its defeat in the parliamentary election.

In fact, the composition of the new government still balances between several choices and strategies. The first option is that of a political and partisan government, where the seats are distributed among the four major parties that now constitute the major parliamentary coalition, namely Nidaa, Yassine Brahim’s Afek, Slim Riahi’s UPL and Kamel Morjane’s Al Moubadara.

The rest will be in opposition with at the head Ennahda which is still problematic. Officially, the Tunisian Islamist party that has already taken the seat of the vice-presidency of the parliament after Nidaa dismissed the Popular Front is not in the coalition government.

The two main political forces issued from the elections (Nidaa and Ennahda) are courting yet without hiding. Some observers, perhaps from Nidaa, are expressing the probability of granting between 2 and 5 ministerial portfolios to Ennahda in the next government, probably to feed the fires of revolt in Nidaa Tounes.

The second option is that of a government of independent technocrats. The point will be then to find pure technicians, each in his field, to be backed by the ruling coalition that will be responsible for supporting and providing political and social lighting necessary for their good choices. It will also be supported by the head of government who must ensure their adherence to the administrative apparatus. This is certainly the situation that is visible in public about the negotiations that Habib Essid has recently begun.

In one option or the other, it is for the binomial “Essid-BCE” to find the right cast and make the right choice, first on the part of the head of government, as conductor or working group lead or that of a head of government “handy man” surrounded by a slew of subordinates themselves surrounded by secretaries of state teams that will only duplicate and will only inflate the government team.

In the first option, ministers must be provided with all the powers due to their charges. Therefore, ministers who are themselves makers intended to make the decisions needed to get the country back to work and reboot the economy. Ministers who are also good negotiators able to find the right mix between state interests and union interests (workers and employers).

In the second option, the action of the government, from which the entire country expects efficiency and swiftness, will fall in the administrative routine. It would then be likely that the ruling party be overthrown by a population tired of waiting for decisions that will save the country from bankruptcy.

Essid just like BCE, who seems to be the real driver of all this, need to avoid making the wrong choices of governance and also avoid casting errors in the choice of ministers.

The famous slogan of the “right man in the right place” is now more relevant than ever. Essid and BCE will have to place the national interest above partisan interests.

The cast will, also and above all, be made based on a new division of the next government structure. That division has to be based on a vision and a strategy. Last minute choice of BCE, Habib Essid has, in theory, not had time to formalize a vision and translate it into a strategy, according to which he should form his government. The pair BCE-Essid, at the head of the executive, does not turn into a quarrel between Carthage and La Kasbah or into a hegemony and control from Carthage over Kasbah. So a word to the wise!

Tunisia: foreign currency assets down to 111 days of imports (BCT)