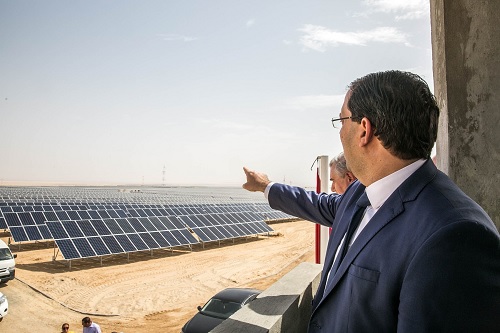 The two solar power plants, worth 62 million dinars, extend over an area of 40 hectares. They are carried out by the Tunisian Company of Electricity and Gas (French: STEG) and financed by the German International Cooperation Agency (GIZ).

The project, intended to produce 36 Gigawatts of electricity per year, will help save 8,000 tons of natural gas/year and cut carbon dioxide emissions by 17,000 tons.

The two plants will meet the needs of 18,000 consumers, that is 1/3 of the needs of inhabitants in Tozeur, the Prime Minister told the media.

“Tozeur will be the first Tunisian governorate to meet 100% of its needs in solar energy starting from Q1 of 2021,” he said.

“This project is part of the Tunisian energy plan aimed to generate 30% of electricity from renewable energy,” Chahed added. Other projects tendered out will be carried out and will produce an additional 2,000 megawatts.

“This is the first time STEG develops an industrial station,” said the facility’s CEO Moncef Harrabi. The first kilowatt produced from photovoltaic energy has just been injected today to the national electricity grid.