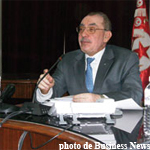 We also learn, during  Tunisian ICT minister’s  first press conference, that Tunisia is planning to invest100 MDT  to triple the area of  El Ghazala  technology hub which should be extended  to Ennahli area in Ariana, that  as many as 13 MDT will be devoted to the establishment of a new submarine cable aiming at improving  telecommunications between Tunisia and Europe in particular, and that no less than 55 industrial zones in Tunisia hosting  1600 companies are fiber optic  connected to allow them access to high speed, and  that  1000 companies are currently enjoying  WiMAX.

Tender for an universal operator.

As for the “letters», Haj Glai mainly talked about the invitation to tender for the choice of a new universal telecom operator. No less than 13 interested tenderers have already withdrawn the tender specifications. The Tunisian ICT Minister remained silent over the identity of those involved, but merely said that they are from Europe and the Gulf. He didn’t say a word about the assessment made by the Tunisian government as far as the financial aspect is concerned However , he said with an enigmatic smile that “we accept the market rule.”, revealing that  the new operator will be granted a year-long grace during which he will enjoy all  what the other two operators would not have. He will be the only one owning 3G and  also, directly or through buying  ISP, he will be the only Internet  provider. Questioned on the possibility for the other operators, namely Tunisiana and Tunisie Telecom to have access to these privileges (technical and commercial) after the first year the future operator will be granted, the minister went equally cryptic.

ICT minister also answered questions about Internet in Tunisia. He made it clear that ISPs are distributors of Tunisia Telecom. He added that prices of different offerings that  distributors are coming up with  are not as high as reported by journalists. He pointed out that there is a real desire to lower Internet prices in Tunisia. Above all, he said the ministry is keen to improve the quality of services provided by ISPs in Tunisia. He mentioned a reorganization of the relations of these Internet access dealers with Tunisia Telecom, which is the only access provider. It emerged from the ministry’s remarks that Internet users and ADSL subscribers may check in the future some improvement in relations with their respective ISPs.

Latest news distilled during the press meeting: it deals with  the new powers Tunisia National Telecommunications Commission will be tasked with: The regulating authority will be empowered  to handle the Internet in Tunisia and so, will be the sole authority in this respect and in this field.

Tunisia: BH Assurance increases its half-yearly net result by 7.31% to...