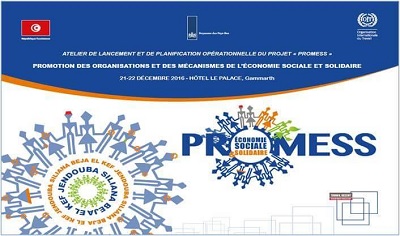 The International Labor Organization (ILO) and its social partners announced at a workshop held Wednesday in Tunis a project called “PROMESS” to promote social and solidarity economy organizations and mechanisms.

The project, launched in collaboration with the Ministries of Social Affairs and Employment, the Tunisian General Labor Union (UGTT), the Tunisian Confederation of Industry, Trade and Handicrafts (UTICA) and the Tunisian Union of Agriculture and Fisheries (UTAP), is financed by Netherlands and will run from 2016 to 2019.

Karim Toumi, “PROMESS” Project Manager told reporters on the sidelines of a workshop on the presentation of the project that the objective is to create a legal and institutional environment conducive to social and solidarity economy and to developing initiatives in the governorates of Béja, Siliana, Jendouba and the Kef.

The project will be based on a participatory approach to allow all the stakeholders to contribute to the development of social and solidarity economy in Tunisia, he pointed out.

Toumi also said the project was preceded by another pilot initiative launched from 2013 to 2015 in the governorates of Gafsa, Ariana and the Kef, adding that this experience had helped create 11 agricultural and service projects providing jobs to 100 youth, 65 of whom are women.

He announced, in this regard, the opening of a tripartite dialogue to foster the structuring of the social and solidarity economy and the development of tools adapted to the creation of sustainable initiatives in this field.

The two-day workshop seeks to present the PROMESS project, its objectives and components and identify the key activities meeting the direct needs of national partners.