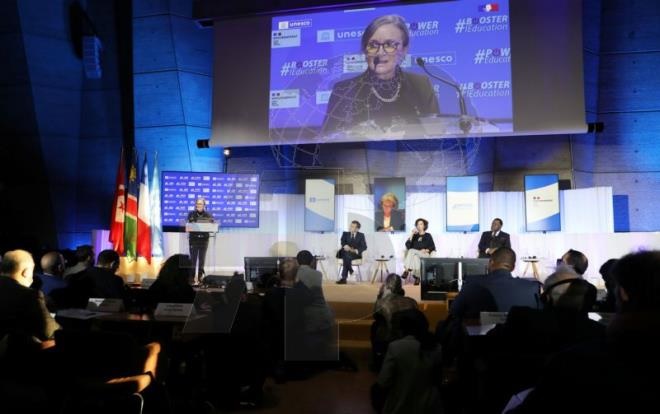 In her remarks at the UNESCO’s Global Education Meeting’s high-level segment, Bouden pointed out that Tunisia «has always considered that sound education remains the only guarantor for peoples’ advancement for the better and for building an impenetrable wall against extremism, fanaticism and violence tendencies.»

In this context, she renewed Tunisia’s call to “the international community, with its various components, to support this national effort and other developing countries’ in this field, and to fulfill countries’ obligations towards financing development.”

The Prime Minister stressed that «education is capable of changing individuals and societies for the better; that conviction has become more firmly established in light of the catastrophic effects of the COVID-19 pandemic on education and culture.»

She noted that «the profound changes that this pandemic has left on educational systems in the world have slowed down the pace of implementation of the sustainable development goals, especially the fourth goal of quality education and deepened the gap between high-income countries and developing and least developed countries, especially in the African continent.»

The Prime Minister considered that «the health crisis revealed the fragility of the educational sector in most developing countries and the vast technological and digital gap between different countries in terms of their handling of the pandemic and ensuring the continuity of education.

«Tunisia, like other countries in the world, witnessed a remarkable decline in indicators related to the education sector as a result of the pandemic, which made resuming classes in proper conditions one of the most important priorities set by the Tunisian government,» she said.

Mrs. Bouden affirmed Tunisia’s support for the “Paris Declaration for Investing in the Futures of Education.»

Prime Minister had arrived earlier on Wednesday in the French capital, Paris, to participate in the Paris International Peace Forum, which begins Thursday and the General Conference of UNESCO, which coincides with the 75th anniversary of its founding. She will also take part in the Paris Summit on Libya, to be held Friday.

Leaders and heads of government of 193 countries are taking part in the conference.