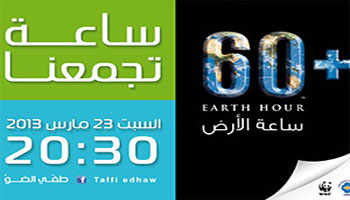 Tunisia will host on March 23 the “Earth Hour,” the largest annual international event held every last Saturday of March, at the initiative of the World Wide Fund for Nature (WWF). The aim is to fight against climate change.

This operation involves turning off the lights and unplugging non-essential electrical appliances for a period of one hour, in order to promote power saving, and to reduce emissions of greenhouse gases and fight against global warming. The aim is to mobilize the largest number of Tunisians around the issue of climate change.

To shed light on the important role of this event, ANME held a press briefing on Thursday, March 14.

Samira Douiri, Director of awareness information and public relations, ANME, said it is an excellent opportunity to bring together various stakeholders for a noble gesture towards the environment which will aim not only to save energy but also to increase consumer awareness about the challenge of energy efficiency, knowing that the energy deficit in Tunisia is up 176% in 2012 and is around 1.6 million toe against 600,000 in 2010, i.e. the highest rate.

This view was shared by Faouzi Maamouri, WWF officer in Tunisia and North Africa who said this simple gesture will also induce a change in consumer behavior in favor of saving electricity.

Which impact for an hour without light?

The choice made on evening time to meet this challenge is explained by the fact that turning off lights for an hour from 8:30 p.m. to 9:30 p.m. at Habib Bourguiba Avenue, Tunis will generate the equivalent of 520 MWH, said Fathi Hanchi , director of the rational use of energy, ANME.

For the tertiary sector, this approach will help save 330 MWH, equivalent to 15% of daily consumption.

Moncef Marzouki will inaugurate the “Earth Hour” on March 23, in the presence of a large number of actors working in several areas. Energy consumers are, therefore, invited to participate in this global event, directly from home, turn off the lights at home and in workplaces for 60 minutes and engage in this simple gesture that reduces greenhouse gas emissions responsible for accelerating climate change.

Statement by the spokesperson on the pardoning of prisoners by Egypt’s...