Tunisia: reasons and explanations for an announced dismissal 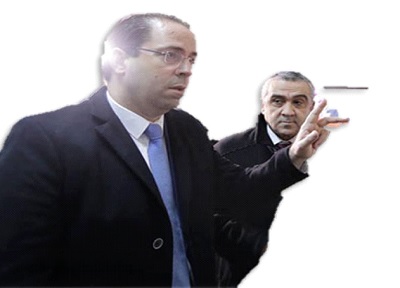 “Prime Minister Youssef Chahed has the luck of statesmen promised a bright future, commented an impressed European diplomat based in Tunis for several years.

In no time at all, the one who was thought to be politically finished was able to reinvent himself a national destiny by triumphing over Hafedh Caïd Essebssi and defeating the all-powerful Interior Minister Lotfi Brahem.

It must be recognized that Youssef Chahed not only has the resource and the energy, but that he is also totally unpredictable, admits an adviser to the President of the Republic.

This is how French online newspaper “Maghreb Intelligence” summed it up, when talking about the dismissal of Interior Minister Lotfi Brahem by the Tunisian Prime Minister.

The same source recalls that this change of the interior minister, the second of which Youssef Chahed gets rid almost under the same conditions (Like Hedi Majdoub in Bouargoub where Chahed supervised an anti-terrorist operation, Brahem was forgotten in Tunis when Chahed flew to Kerkennah, two will learn their resignation by the press), with the agreement of the Head of State, Beji Caïed Essebsi (ECB), about whom the newspaper said he “seems unwillingly or willingly to follow his Prime Minister in all his wishes.”

BCE had received the same day his head of government, the way he had received him with a smile after his media appearance against the son of the head of state.

All this makes some people say that BCE will take things in hand and is in the process of rectifying the situation.

To others, like Maghreb Intelligence, he says that it is Prime Minister Youssef Chahed who would lead the dance from now.

To believe the same source, Brahem would have been put aside because he has become a “cumbersome minister who predestined to a role of the most important in the very near future (…) and close to Ben Ali’s circles, some friends of whom were known for their activities borderline.”

Then come a jumble of reasons that the same source reports: the fact that Brahem would be “pointed out by several European countries who criticized him for his laxity in his management of illegal migration” and that he would have “come closer to the Americans via Gulf personalities”, information already reported by the same newspaper online since November 2017 as part of a campaign already targeting Brahem.

Other sources of our own, who requested anonymity, report a dispute between Caid Essebssi and Chahed over the dismissal.

According to these sources, Chahed reportedly complained Wednesday to the Head of State that he could no longer work with Brahem.

BCE has made it a condition for his replacement by the current defense minister, knowing that Abdelkerim Zbidi will not accept.

Our sources also evoke a strong feeling of Youssef Chahed against his Minister of the Interior whom he accused of working on behalf of his rival BCE Jr., Hafedh son of Beji.

This, not to mention Brahem’s bad relations with the Islamists of Ennahdha, Chahed’s new support against Hafedh.

Where is the truth in all this? It is certainly not the Prime Minister who will say it in front of the parliament, which will not hear him about this mini-reshuffle.

⦁ Hammadi Jbali had not dismissed Larayedh in September 2012

What seems to be certain in all this is that the case of Kerkennah’s sinking was only an alibi and that the dismissal of Brahem was certainly decided since the famous “48 hours warning” to lock Neji Gharsalli as if the current interior minister knew his hideout and would not want to arrest him.

In a post on his official Facebook page, MP Mongi Rahoui believes that linking the resignation of Brahem with the sinking of Kerkennah is a lure.

“The Kerkennah incident is not the only one in the history of more than one interior minister. Why not have dismissed other ministers on whom there were even suspicions of corruption? “

It is true that such a tragedy had taken place during the time of provisional president Moncef Marzouki and the government of Hammadi Jbali.

The latter had not dismissed Interior Minister Ali Larayedh, and the interim head of state had simply thrown a bouquet of flowers at sea in tribute to the dead of the Lampedusa route in September 2012.

Ennhahda’s MP Mohamed Ben Salem who had called for the departure of Brahem, in response to the Kerkennah boat sinking, should remember it.

The tense relations between Chahed and Brahem are no secret to anyone in Tunisia and his desire to see him quit the government dates back to the beginning of the year. And if he had not been able to knock him out, he would have repeatedly stand in his way by refusing many of his proposals for various appointments in his own department.

Lawyer and former Nidaa member, Nizar Ayed sees the good side of Brahem’s exit from the government and seems to strongly believe in the political potential of this man who has, it is true, been one of the artisans of the fight against terrorism.

According to Ayed, this exit would allow him “not to shoulder the weight of the failure of the Chahed government, to take advantage of the great popularity gained since the affair of the Islamist woman from Germany, no longer to be forced to put his own political ambitions in the forthcoming elections, as demanded by certain political parties.

This leaves him finally a year and a half to prepare well, which is a delay that ministers will not have and who will become famous strangers once they leave the government.

What is notable is that this resignation had not left insensitive Tunisian social media who have, for the most part, refused the decision of Youssef Chahed.

For the first time, people took to the Tunis street on Wednesday night, not against the Minister of the Interior, but in his favor.