HomeFeatured NewsTunisia: return of the child prodigy, to save the BTK
Featured NewsInterview

Tunisia: return of the child prodigy, to save the BTK 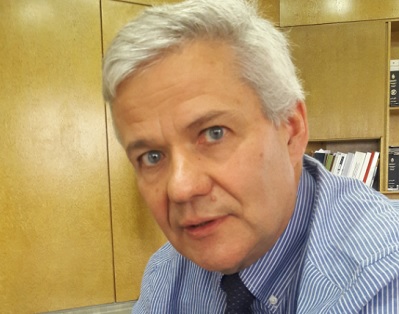 He was born in Morocco and spent his childhood in Tunisia, since he studied at Mutuelleville primary school in Tunis.

The finance professional he had become, for 18 years, rolled his professional hump abroad and overseas, through the US and British financial centers.

His last appointment at the head of BTK, a subsidiary of the French group BPCE (Banque Populaire & Caisse d’Epargne) in August 2016, is almost a return of the child prodigy.

In this interview with the BTK CEO, Bernard Fremont focuses on why he was appointed and the MTP or medium-term plan to rectify this former Tunisian-Kuwaiti joint bank. The bank was losing money, but it is already starting to recover.

Since it was bought by BPCE, BTK has not always been in deficit. What happened to it, and two years in a row?

Like other local banks that have had to do this, the BTK has undertaken, since my arrival, a restructuring program that involves a consolidation of its accounts, in order to prepare it for different accounting issues and regulations, which are or will soon be put in place in Tunisia.

The bank is now keeping in line with these new devices and adopts a new organization to meet the needs of tomorrow’s Tunisian economy.

The bank’s 2017 result was down, from operations to net income, to negative liquidity. What about all these ratios!

Upon my arrival, a full audit of the bank was conducted. A new organization has been set up and a medium-term strategic plan has been drawn up for the years 2017 to 2020. This is rigorously followed. We respect it. It assumes, on the purely accounting side, to fund what needs to be, and thus allow BTK to rebound quickly and ensure its future development.

It’s as if you were saying, or should we understand that, that this is intended?

Wanted is not necessarily the right term. In any case, the work we are doing is a necessity and is preparing the future well.

In 2017, the BTK was in deficit and you made however less provisions, since your provisions decreased by 51.7 MD compared to 2016 which was also in deficit.

We have significantly provisioned in 2016. We have made fewer provisions in 2017. This simply reflects the remarkable efforts undertaken by BTK employees. We were even ahead of what we had budgeted. In 2018, the cost of risk will continue to improve thanks to the

consolidation of our portfolio. In the particular economic situation in Tunisia, I think that what has been achieved by BTK teams in the space of less than 2 years amounts to a performance.

Has recovery been able to protect you from rising resource costs?

In 2017, our resource cost was better than the budgeted one.

The action on recovery certainly helped to improve it. Also, strict management of our asset and Liability management, a conquest of flows combined with a development of our demand deposits have also largely contributed to the control of our resource costs.

How does the NPL ratio behave and at what level is it now?

It is still at a level that remains insufficient and on which we continue to work to bring it back to the standards of the place.

What does this MTP actually consist of and what are its objectives?

The capital increase subscribed by all our shareholders enabled us to consolidate our financial structure and to respect all of our regulatory ratios, Tier 1 and 2. The same is true for our liquidity ratio.

This new context has allowed us to retarget again the clienteles we target, Corporate, Retail and Private Management.

We have also renovated many agencies and the image campaign recently made will make it known.

Finally, a review of our products and services offering will allow us to offer more quality and expertise and thus generate more commissions for the bank.

All the organizational work of the BTK that we are currently conducting should allow the process and the work-flow to be gradually put in place and be as effective as possible.

When is the bank expected to return to profitability, according to your business plan?

This return is scheduled for 2019. That said, nothing prevents us from anticipating it. The motivation of the teams is there and the desire to return to positive results is very strong here.

The new spirit that drives the BTK team, young and dynamic, has a strong desire to move forward, to respect this MTP and even to anticipate it.

In the meantime, how did the different ratios of the bank behave in the 1st quarter of 2018?

The figures are still provisional, but the NIM (net interest margin) is growing by 21%, which is quite remarkable in the current context; the NBI posted positive growth, the cost of risk is once again very strongly improved.

The first elements we have in the first quarter of 2018 augur results that can satisfy us and put us ahead of the MTP by the end of the year, if we continue on this path.

You have noticed, as the whole place, that the climate within the BTK had been shaken by the information of the sale of a number of African subsidiaries of BPCE Group. Is this decision of the group still valid in 2018?

The media did echo this information. This is a subject that concerns the shareholders of the BTK [Editor’s Note: Including the Tunisian State]. As Chief Executive Officer, I have the mission to lead the bank’s strategic plan.

It is assumed that the sale will not be made before the completion of the strategic plan, because it would sell badly a bank that loses money!

As I just told you, my mission is to drive the MTP and if possible to anticipate the performance and the result displayed in the MTP. In general, when you buy a business, it is rather its future that you look at.

It is therefore unnecessary to ask if there are already buyers, Tunisian or foreign, interested in taking over the BTK!

I am obviously in close contact with the shareholders on this subject. But it is not up to me to communicate in their place

One million of Tanzania’s poorest households to be supported