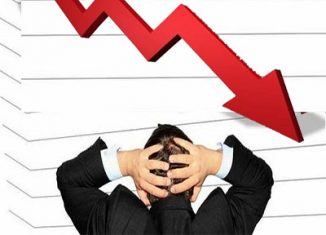 There has been much discussion these days in Tunisia of the bankruptcy of the State, some considering it imminent and others see it already consumed.

There are information, always unverifiable, and cyclically relayed, according to which the state has no money to pay the salaries of its employees “this month.” After this deadline, it is now clear that there has been nothing and the government always pays its employees on time.

Bankruptcy and insolvency sometimes go hand in hand as is currently the case. The state would, as we learn all day long, be unable to pay its debts in respect of 2017, and is declared bankrupt.

It is probably easier said than done. And those who are yelling it are certainly unaware that a state is not programmed to “go bankrupt”. It is conceivable and even very common for an economic agent, a household or a company that cannot meet their commitments, leading to legal proceedings.

They would then sell assets – resources available – to pay down the liabilities, at least to the extent possible. The goal is to reallocate the capital from an economic agent to another and pay creditors.

And since it is the question of a state, this procedure is unthinkable and unimaginable. Can we organize the liquidation of a country and taking over of its activity by a buyer? The answer is threefold not. First, because states are sovereign and are the representatives of their people and therefore non- transferable. Moreover, the body intended to resolve disputes between debtors and creditors does not exist between states. Second, country’s assets have sometimes very complex forms especially when it comes to assets that are not fungible, i.e. that cannot be sold, as is the case for example of a road network. Finally, a State is one only on account of its ability to raise taxes and this vocation cannot be transferred.

Stubbornly speaking of bankruptcy with regard to the State means therefore perfect ignorance of public finances. However, there can be default or suspension of payments. And even if that would be the case, the State has the latitude to negotiate with creditors to agree to reduce the debt. This is what is called debt restructuring.

If it undertakes not to repay the debt, the State, then, runs the risk of losing credit and get a bad reputation. Nobody would lend it money under these conditions. However, it remains true that the state still has the political means to escape the apocalyptic schema of payment default, usually by increasing its revenues or acting on its spending. But the most commonly used technique is the tax increase.

This means the Tunisian State would not be in payment default with regard especially salaries of its employees, to which a budget is irreversibly allocated at the beginning of each financial year.

However, this is not the case when it comes to the repayment of external debts which, according to forecasts from the International Monetary Fund in 2017, would reach the $ 30.7 billion against $ 29.3 billion this year, i.e. 71.4% and 69%, respectively.

These are excessive rates principally on account of other economic indicators including gross national savings (14.1% of GDP), gross investment (21.8% of GDP) and total revenue excluding grants (23.9MD) estimated under the year 2016.

And tax revenue needs to be doubled to fall to acceptable levels of debt, according to a tax expert. Hence, he advocates the urgency of genuine reform of the tax system, particularly flat-rate schemes (lawyers, doctors,…) and fight against the informal economy.

The latter is the most nagging problem which Tunisia regularly faces under debt due to the debt service which represents the first expenditure of the state budget. By devoting to it 5.13 billion Tunisian dinars (over 2.3 billion) in 2016, the Tunisian state allocates to it more money than the combined budgets of the eight following departments: health, social affairs, employment and training, development and international cooperation, transport, culture, foreign affairs and tourism.

Bardo attack: 80% of terrorists involved were arrested and Daesh is...