Tunisia: why Trump excludes Ennahda from list of terrorist organizations! 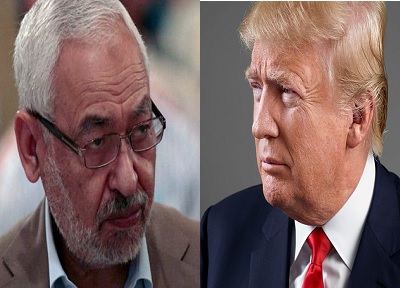 No one yet knows what specific measures the Trump administration will take to designate the Muslim Brotherhood as a terrorist group in what is believed to be a wider crackdown on Islamic organisations.

The political elite in Washington is deeply divided over the classification of the movement as a “terrorist” organization and the disastrous consequences that this could have for Washington.

Recent reports by intelligence agencies have called for its offshoots in Tunisia and Morocco to be excluded from whatever action is decided upon.

Since Donald Trump’s inauguration as president, US intelligence services have been analyzing the situation in Arab countries, particularly those parties and organizations considered to be an extension of the Muslim Brotherhood. The focus has been on Egypt, Jordan, Syria, Lebanon, Qatar and Libya, as well as Sudan, Mauritania and Algeria.

Observers, quoted by the Middle East Monitor believe that if Washington goes ahead with this designation, it may end up losing most of its allies in the region, as Islamic political parties linked to the Brotherhood exist in Indonesia, Pakistan, Morocco, Tunisia, Jordan, Iraq, Kuwait, Yemen and even Turkey. They stress that the decision might result in serious damage, with negative consequences detrimental to US interests.

Islamist parties in Tunisia and Morocco regard Trump’s bigoted and crude statements — which seek to tackle Islam under the guise of fighting terrorism — as inapplicable to them, given their growing role in combating terrorist ideology. The Ennahda Movement in Tunisia, for example, always stresses that it is the biggest victim of terrorism and, in the words of its president, that democratic Islam is the best solution for combating the terrorists.

Morocco has become a key player for the US in the fight against terrorism in North Africa, particularly in the aftermath of the Arab revolutions that swept through the Middle East and North Africa (MENA) region, leaving behind many collapsed states and the emergence of jihadi groups. Foremost among these is the “Islamic State”, which represents a real threat to world peace.

According to the Morocco’s Al-Masaa newspaper, US intelligence has excluded both Tunisia and Morocco from the possible designation because of the role played by Islamic parties – namely the Justice and Development Party (PJD) in Morocco and Ennahda in Tunisia — in the democratic transition in both countries and their participation in government. CIA reports reveal that the reason for their non-inclusion on the terrorist list is the fear that doing so would push religious youth towards violence and extremism, targeting the West in general and the US in particular.

Ammar Fayed, an Egyptian researcher on Islamic groups, has pointed out that Ennahda and the PJD are not the only parties which condemn terrorism; all Islamic parties, he explained, have condemned terrorism and deny any affiliation with any organization outside their country.

The researcher suggests that a move to designate the Muslim Brotherhood as a terrorist group would have no effect on most other Islamic parties. In Morocco and Tunisia and elsewhere, these are official parties that do not carry the “Muslim Brotherhood” label and are engaged fully in mainstream political life; he cited Libya, Jordan, Kuwait and Algeria as examples.

“It seems that the positions of Islamic parties in condemning terrorism, as well as their presence as vital partners in government enjoying internal recognition in Tunisia, Morocco, Yemen and Libya, has created a dilemma for the US administration as it tries to keep [Egyptian President] Abdel Fattah Al-Sisi happy as a new Trump ally,” The researcher told Arabian Gulf Gate website.

“Islamic parties are already partners in governments that are allies with Washington and other foreign governments and international organizations, or are active in political life with parliamentary representation, so how will it be feasible to designate them as terrorist organizations?”

This is a real dilemma that Trump’s team is trying to overcome. If an extreme form of the designation policy is adopted, this would place severe restrictions on US policy in the MENA region. America would not, for example, be able to designate Ennahda as a terrorist organization and still maintain relations with it, insisted the researcher. “Cutting ties with a key player in Tunisia’s government would not serve US interests.”

The actual details of a designation of the Brotherhood as a terrorist organization are as yet unclear, he noted. The various components of the Trump administration do not share the same enthusiasm for the policy and it is still subject to internal discussions, the outcome of which is difficult to predict, despite the almost daily media reports about the discussions taking place and the fact that there is a proposed bill in the US Congress on the same subject.

According to the researcher, the decision may have a narrow focus on the Muslim Brotherhood in Egypt primarily, as it is the largest and main movement and thus the main target of the pro-Israel lobby in Washington.

This focus would aim to provide more support for the Sisi regime in Cairo and would not mean placing hundreds of thousands of individuals on the US sanctions list. Such decisions, he concluded, often target specific leaders and figures in order to restrict their movements abroad or their sources of financing.

Tunisia: supplementary finance bill to be ready next July 1