HomeFeatured NewsWhat's behind the BTK buyout? What will the State do with it?
Featured News

What’s behind the BTK buyout? What will the State do with it? 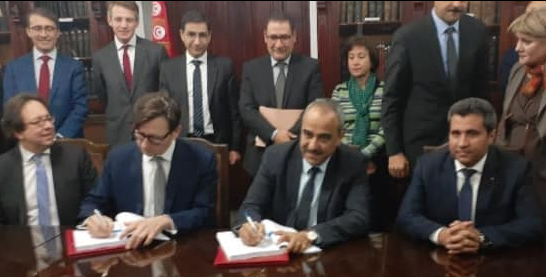 Last week was marked, financially, by an event of great importance. Without any announcement effect, the Tunisian Minister of Finance organized, on December 13 at the library of the ministry and in the presence of personalities, who at first sight have no connection with the event, a ceremony to sign a tentative n agreement with the first head of the BPCE, for the purchase of 60% of its shares in the capital of the BTK.

Putting an end to Tunisia as a financial centre for branches

Aspiring to the status of an international financial centre, Tunisia has for many years found itself in that of a financial centre for branches of foreign banks, with the ensuing impoverishment in banking techniques, and above all in foreign exchange outflows in the form of various and varied agreements.

A situation that some of these foreign banks, such as the French BNP Paribas and BPCE, are getting tired of.

Others, American and Arab as well, but whose international scope of the mother banks has not benefited the Tunisian financial center and which do not stand out by the existence of a policy for the country where they are located, except that of reaping the benefits of foreign exchange agreements.

Some of them, when they finally leave Tunisia, even decide to sell to other banks, third and even fourth rank, which does not help the Tunisian financial center.

And as if to confirm the absence of a Tunisian project at the BTK of the BPCE, for example, Radhi Meddeb who was Board chairman explained on RTCI his resignation. “When I found myself in a situation where the main shareholders did not feel concerned by the destiny of this institution, that decisions were not taken, that exorbitant delays were implemented, not to achieve what was announced, I felt that I was no longer in a position to share a vision, which no longer existed, of the main shareholder,” said Meddeb.

Bought at 300 MTND, sold for next to nothing!

The French BPCE had bought back 60% of BTK shares, whose capital was equally divided between the Tunisian State and a Kuwaiti sovereign fund KIA (Kuwait Investment Authority), at the end of 2017 for 300 MTD, of which Tunisia had received half (150 MTND).

In September 2019, the French BPCE decided to sell its 60% stake in the capital of the Tunisian BTK, to the Banque Populaire of Morocco. The agreement was almost sealed, and even announced on September 25, 2019 by the Moroccan bank BCP (Banque Centrale Populaire) for BPCE’s shares in Cameroon, Madagascar, Congo and Tunisia.

But this was without the pre-emption right legally due to the other remaining shareholders, including the Tunisian state and its Kuwaiti counterpart, which each have 20% of the capital of BTK.

These shares were in danger of melting like snow in the sun if the new buyer decided to increase the capital of the BTK and that Tunisia, lacking money and currency above all, would not follow.

As early as May 2019, Tunisia informed the BPCE that it did not intend to sell its shares and would even have convinced the Kuwaitis not to do so on their side.

Other information that had circulated on the same date was the French bank’s intention to sell its shares to the Moroccan bank at a symbolic price. BPCE has never commented on or denied this information.

A good deal for the State, authorized by Carep. Radhi Meddeb gives a clue

After several visits to Tunisia and meetings with Tunisian officials, BPCE informed the Tunisian authorities of its intention to sell its stake in the capital of BTK to a foreign bank.

This stake amounts to 60%. It also, and in the same framework, made an offer to the Tunisian State to buy its stake in the capital of the BTK which amounts to 20%, at an overall price of 40 MTND, a price fixed on the basis of a valuation of the BTK which would be 198 MTD, assets and liabilities included, and where the price of the head office building alone could be significant, and which would have been made by Rothschild.

The “Commission d’Assainissement et de Restructuration des Entreprises Publiques” (Carep), meeting for this purpose, would however have rejected the French offer, judged below the bank’s target valuation.

On the basis of other technical and legal elements, discussions have been initiated between the Tunisian State and BPCE to start the formalities necessary for the acquisition by the Tunisian State of BPCE’s stake in the capital of BTK.

It should be noted that for the “experts” who would like to criticize this operation, these discussions were authorized by the Carep, and were conducted by the heads of the technical and legal departments of the Ministry of Finance, the Central Bank of Tunisia and the Prime Ministry.

These discussions led to an agreement in principle for the acquisition by the Tunisian State of the BPCE’s stake at a very good price, which until then had been covered by the secrecy of the negotiations; that would make a very good deal for the Tunisian State, which is expected to finalize the operation in February 2020.

Asked about RTCI, the former Board chairman of BTK, who also judged the valuation of the bank negative and assured that he had no information on the amount of the transaction,

said that “I hope it was made at the symbolic Dinar, and I hope that BPCE has injected extra money to get the bank back on its feet”.

That was an expert opinion, not official information, let’s make it clear, and the reality may not be far from what Radhi Meddeb says!

The new BTK will not be a public bank

It should also be noted that the Carep, which authorized this operation, has, we understand, also decided to immediately begin the formalities for the State’s exit from the capital.

It is understood, moreover, that a project would be under preparation, with the Ministry of Communication Technologies and Digital Economy – hence the presence of Minister Anouar Maarouf at the signing ceremony – having as an essential component the transformation of the BTK into a bank based on digital technology and this, in partnership with the Tunisian Post Office and Tunisie Telecom.

It is also understood that the last two public companies will be partners in this new Tunisian digital financial institution.

However, the next BTK will not become a public bank, as the State has already taken the option to directly withdraw from the next digital bank, which should contribute to the achievement of financial inclusion in Tunisia.

The digital transformation should be ensured, first by the Ministry of ICT, and also by the Post Office which has a long experience in the field of digital finance, the technical means of Tunisie Telecom, as well as significant German support.