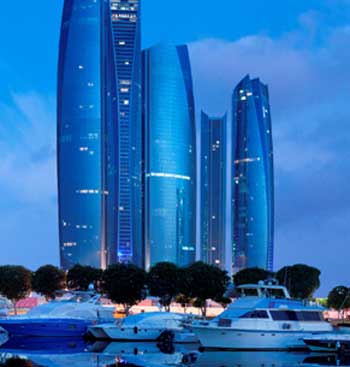 The Abu Dhabi tourism industry has reported a significant uplift in its MICE and business events bookings and predicted the trend will continue, according to the Abu Dhabi Tourism and Culture Authority (TCA Abu Dhabi).

Tourism stakeholders, who are set to take part in the Gulf Incentives, Business Travel and Meetings Expo (GIBTM) from March 24 to 26 at the Abu Dhabi National Exhibitions Centre (Adnec), are bullish about the sector’s local future.

The five-star Jumeirah at Etihad Towers, which is set to take part in the expo, said it had an ‘exceptionally good year’ for MICE business.

Doris Greif, the hotel’s general manager, said: “Despite the increase in competition with new MICE venues opening in Abu Dhabi, Jumeirah at Etihad Towers’ market share actually continued to increase. The total number of events held last year at the hotel was 708, up 63 per cent on 2012.

“We credit this success on having built a strong, personable and reliable luxury brand image in the market among clients and corporate and government entities, as well as our dedication to the customisation of various packages to meet the needs of our guests.”

“Building global awareness of our Jumeirah at Etihad Towers Conference Centre as an international venue for excellence in hospitality and event hosting will be a cornerstone of our activities and actions in 2014.”

The hotel offers private party event packages based on the themes of sea and water, where the events take place either above or besides the Arabian Gulf or in one of the hotel’s three swimming pools.

The ‘Above Water Group-Event Package’ is a three-hour group package of networking refreshments at the hotel’s Scott’s terrace or Observation Deck at 300, while the ‘Besides Water Group Event Package’ is for groups seeking their own gourmet private beach party and includes live BBQ cooking stations.

Aaishah Bohari, director of sales and marketing, said: “We are planning to add customised industry event packages to the list of available offerings, including revised food and beverage menus incorporating both Arabic and Thai cuisines, flexible meetings and events arrangements to suit the growing market of MICE business and requests that we encounter throughout the year,” said Aaishah Bohari, Director of Sales & Marketing.

Mubarak Al Nuaimi, promotions and overseas offices director, TCA Abu Dhabi, said: “The simple fact is that there is now much more to business events in Abu Dhabi. There is growing impetus among our private sector to develop MICE specific product and our intention is to roll out this expanding portfolio at GIBTM, particularly to its 300-strong hosted buyer contingent. We have assets and activities in the emirate which clearly sets the destination apart and which will give us a stand-out edge.”

At 4 per cent year-on-year in February, housing inflation continues to hover in a closed range between 3.5 per cent and 4.2 per cent since July last year.

“We anticipate housing inflation to gradually trend downward as new supply of housing units balances the market, though further delays in the government housing initiatives is likely to keep rental inflation high,” said the report.

This gradual downward trend in domestic inflation since end of November last year is in line with inflation rate in major trading partners.

“While the external factors’ contribution to Saudi inflation will remain subdued, we expect domestic inflationary pressure to remain relatively strong,” stated Jadwa in its report.