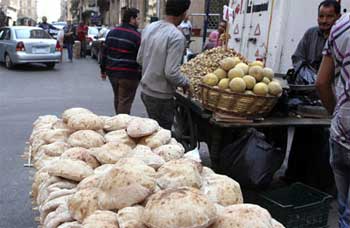 Egypt’s food subsidy bill will be 30 billion Egyptian pounds ($4.31 billion) this year, an amount that is expected to remain stable in the next fiscal year that begins in July, the new supplies minister said, pledging to tackle a smuggling “mafia”.

Khaled Hanafi was appointed last month after his predecessor sacked top officials at the state-owned silos and storage holding company and at the main wheat importing body amid allegations of corruption.

Although corruption along the supply chain in the world’s top wheat importer has long been well-known, the new minister is showing signs of being more outspoken than most about the issue that leaches much-needed funds from an economy struggling to recover from three years of political turmoil.

Hanafi estimated that around 7 million Egyptian pounds of the subsidies bill was wasted yearly due to the smuggling.

He said in an interview published on Sunday by the official Al Gomhuria newspaper that his ministry was in the first phase of a fight against a subsidised flour-smuggling “mafia”, without giving further details.

Government officials have in the past said that the government spends about $5.5 billion each year on food subsidies. It was not immediately clear whether the change was due to currency fluctations, a difference in policy or previous estimates being wide of the mark of actual spending.

The wheat is used for its subsidised bread programme upon which millions of poor Egyptian depends. The programme provides loaves for less than 1 US cent per loaf – a state-regulated price unchanged since 1989 and equal today to a seventh of the real cost.

However, corruption in the wheat sector is big business for profiteers. Bakers producing state-subsidised loaves siphon off flour provided by the government and make a killing in the black market. The government’s flour is then baked into loaves sold at private bakeries beyond the reach of the poor.

Bakers have long been able to cheat authorities because consumption data is hard to come by.

Hanafi attended a meeting convened on Saturday by the new interim prime minister, Ibrahim Mahlab, about the subsidised bread programme. A statement posted on Mahlab’s Facebook page said Hanafi was working to modify the current system to “resolve the crisis of a loaf of bread” and ensure that the loaves reach those most in need.

The new minister has showed signs that he will continue corruption probes, last week saying that he would soon review the prices the government pays to the silos and storage company to store wheat.