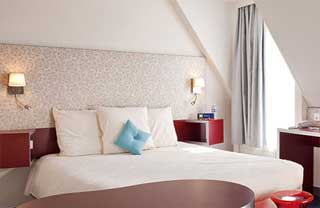 Accor Middle East, one of the leading hospitality groups in the region, recently signed a management agreement with Dubai-based master developer Nakheel to operate its first Ibis Styles hotel in the region.

The property will benefit from Nakheel’s expansion of the area, including a second mall, cinema and an entertainment zone. The Ibis Styles Dragon Mart will be attached to the new Dragon Mart shopping mall and will be highly visible from the Dubai-Hatta-Oman road.

“The Ibis Styles brand offers the perfect fit for Nakheel’s property at Dragon Mart in terms of the brand’s ability to inspire a happy mood among clients through creative and personalised design,” said Christophe Landais, managing director for Accor Middle East.

Ibis Styles Dragon Mart’s guests will be able to walk directly into the mall. The hotel’s 249 rooms will feature an all-day dining restaurant, lobby lounge/café corner and a bar. Ibis Styles Dragon Mart will offer all-inclusive packages such as all-you-can-eat-breakfast and free Wi-Fi internet connection. The property is expected to be completed by end of 2014.

Ibis Styles and the other two members of this family, Ibis and Ibis budget, believe in the same three key values: they are modern, simple and all about well-being, said Landais.

“We feel that it is the right time to present our guests with the choice of a new vibrant and trendy urban experience in the economy category with Ibis Styles, particularly with the growing need for affordable hotels ahead of Tourism Vision 2020,” concluded Landais.

Accor operates 65 hotels across the luxury to economy spectrum encompassing 15,520 rooms in the region and has another 28 hotels under development, bringing the number of total properties to 93.

The Ibis Styles Dragon Mart property is the beginning of Accor’s Ibis Styles portfolio in the region, fitting in with the group’s expansion plans to operate 100 hotels within three years in the Middle East.

Tunisia: STIP reduces losses in the first half of 2018

Tunisia: traffic down 50% at Port of Gabes