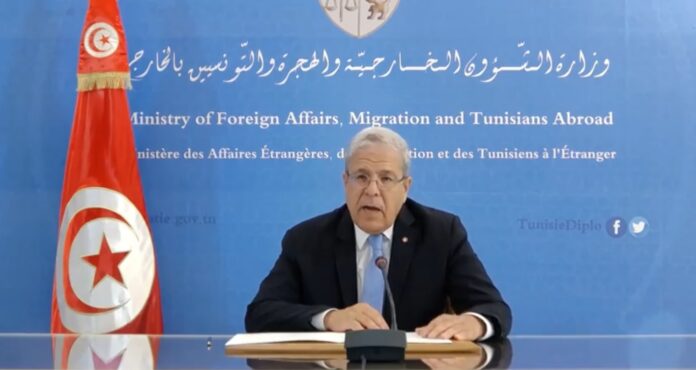 Democracy in Tunisia is an irreversible option, and human rights and public and individual freedoms are guaranteed and protected, said on Tuesday the Minister of Foreign Affairs, Migration and Tunisians Abroad, Othman Jerandi.

In a speech addressed to the participants in the meeting of the UN Human Rights Council, Jerandi underlined, that no infringement was brought to “the freedom of expression and to demonstrate, contrary to the information relayed. on this subject.

Quoted in a statement from the Foreign Ministry, Jerandi reaffirmed that “the exceptional measures taken on July 25 by President Kais Saied are based on article 80 of the constitution and intervene in response to the urgent demand of the people and put an end to the political chaos that reigned in the country.

The minister said in his speech, as part of the interactive dialogue that was organized today with the Office of the United Nations High Commissioner for Human Rights on the subject of the “situation of human rights in the world ”, that the media landscape in Tunisia is“ a pluralistic landscape accessible to all, without any exclusion.

He also underlined, “the need to respect the rule of law, to fight against corruption, and to prosecute all those who benefited from the privileges or would be involved in corruption cases before July 25, 2021.

For its part, the Office of the United Nations High Commissioner for Human Rights reiterated its strong commitment to continue to cooperate with Tunisia, ten years after the opening of its office in Tunis.

The decision to open this office was at the request of the Tunisian state to break with past bad practices and promote respect for human rights in the country.

“The United Nations is there to help Tunisia to build, on solid and lasting foundations, a true democracy”, assured the High Commissioner, adding that the office of the OHCHR closely follows the process of the Tunisian democracy, in a context crisis.