First major Tunisian-Libyan meeting lives up to its promises 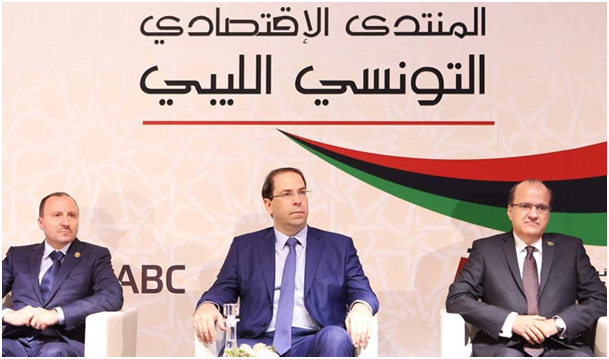 Senior officials and more than a hundred Tunisian and Libyan businessmen were present to discuss partnership opportunities in various sectors.

Speaking at the forum, Bassem Loukil, President of the Tunisia Africa Business Council (TABC) said: “We have very good relations with Libya and we must support our neighbor and historic partner, and work together for the Tunisian-Libyan economic recovery and Maghreb integration.

He called for the establishment of a privileged channel for all sectors of the Tunisian economy with the competent Libyan authorities, and vice versa, in order to boost trade and investment in Libya, in particular by facilitating the financing of operations between the two countries.

On another note, Bassem Loukil said that the Tunisian-Libyan Bank intends to sign several agreements with Tunisian investors for the creation in Tunisia of several factories (processing of agricultural products and cement plants).

As for Prime Minister Youssef Chahed, he said that the areas of partnership between Tunisia and Libya are multiple and go back several years.

He added that the national unity government is working to strengthen its cooperation with Libya, which remains a strategic partner, adding that large projects are planned between the two countries in various fields, such as energy, electricity (energy production and import programs) and the creation of the Ben Guerdane free trade zone.

For his part, Tunisian Minister of Trade Omar El Behi said in his remarks that the government is considering establishing the project “oil for Tunisian goods”, with Libya, stating that Tunisia suffers from an energy deficit and Libya imports large quantities of goods.

He added that Tunisia is working to increase the value of its trade (maritime, air transport) with Libya, recalling that trade stood at more than 3 billion dollars in 2011.

The first edition of the Tunisian-Libyan Business Forum will run for two days; the forum aims to allow Tunisian and Libyan business leaders to meet, to consult each other but also and especially to improve the very important exchanges that already existed before 2011.

Organized at the initiative of TABC, the meeting also aims at a better industrial and economic rapprochement between Tunisia and Libya and provides all the necessary support

to boost the cooperation, trade as well as the investments between not less than 200 Tunisian and Libyan leaders.

Tunisia: corruption and mismanagement of public funds continued in H1 of...

Expert warns on dangers of over-fishing in West Africa